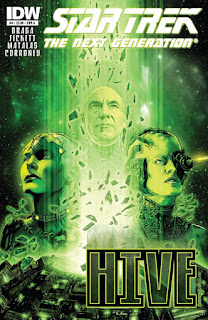 There are legions of loyal Star Trek: The Next Generation fans out there almost twenty years after the last episode of the show aired. And the ones that really drink their kool-aid, such as myself, will tell you that TNG was the greatest television franchise of them all, with the greatest ensemble cast. Despite Dixon Hill, Riker's trombone soloing, and Geordi's painful attempts to get laid on the holodeck, the show still defines classic Trek. However, the same cast that brought us All Good Things and The Best of Both Worlds, also starred in some of the worst movies of all time. As a huge fan of the show, this always filled me with bitter disappointment and resentment. The only movie that did the Star Trek universe any justice at all was the 2009 reboot by J.J. Abrams. Wrath of Khan fans, don't start flooding us with hate mail just yet, if you're into Trek, Wrath of Khan is a damn fine film. But to the average sci-fi fan it has little appeal. This was always a shame. I wanted people to see and experience Star Trek at it's best so they could get an idea of why I always held the show in such high esteem. All of this movie hating is especially relevant when talking about the TNG films, because they have no appeal to even the most die hard Trekkies out there. These films seriously suck. No one has ever wanted to see Picard salsa dance. And the Borg Queen is to Star Trek, as midichlorians are to Star Wars. The only thing worse than the TNG films has to be Voyager, or Enterprise...at least the Enterprise theme song anyway.

Well...IDW decided to mash Seven of Nine and the Borg Queen together in a four issue comic series. Groooooan. Being a Star Trek fan has wasted countless hours of my life, but when it's good, it's really good. The Borg are the best Star Trek villains of all time, so there could be enough to pique my interest here despite being force fed all of the worst parts from Voyager and the movies. Brannon Braga is a Star Trek staple, another solid move adding him as a writer. However, he is not alone, and three writers on a comic has rarely ever worked. In terms of this series though, the writers knew their fan base. There were tons of references only TNG diehards were going to get, we got to see Riker on the Titan, and the plot involved tons of...time travel. Wait. That sucks...and it did. There is no way to make a plot convoluted quicker than adding multiple realities. Thor recently did it in comics and ruined a whole five issue arc. So, yeah, there are some nuggets in this one that make it well worth the read for really big fans of the series, but there is also a fuckload of time travel too. Proceed with caution.

I have never come to expect much from the art in a Star Trek comic, but the art in this one was better than "eh" (in a good way), and some of the covers were actually on point. The technology and space battles were...interesting. Who knew? It was like finding the treasure of the Sierra Madre in a Star Trek comic. The art is usually one area that makes turning these stories into comics almost always questionable. More often than not, the art will actually detract from the story. I see it in Star Wars and Star Trek comics constantly. With a better plot, IDW could actually start creating TNG comics that people will actually enjoy instead of just tolerate, but they have to give us at least serviceable art. They did it here. They can do it again. Some of the novels (Dark Mirror. Q Squared) were actually on par with some of the best television episodes and could be great comics. The novels are not stuff that I can justify reading these days, but I review comics from time to time and this gives me the perfect cover story to read every issue.

The initial idea of turning these successful television shows into movies, books, and comics was not without merit. But almost always the creative teams fail to execute. If Star Trek 2009 taught us anything, it's that these stories can be good. Hive is definitely not the comic series that will take TNG comics to the next level, but it is definitely a step in the right direction. I'm not saying that these books are bad, but parts of them certainly are. Even the most questionable moments in this four issue series are going to hold some appeal for TNG fans. I would love to put an awesome monthly TNG book on my pull list, but I can't at this point. We are nowhere at the moment, but with a little work anything's possible. Let's make this happen IDW.
Posted by The Hammond Comics Blog at 10:08 PM