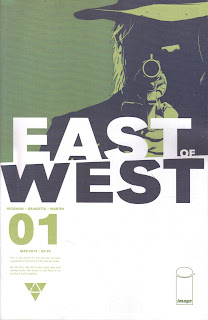 2013 has been very kind to the world of comics, and after only one issue, East Meets West may have the most potential out of any new series in an already fruitful year for funny books. Hickman and Dragotta (FF) have the entire comic world abuzz. The book is completely sold out, so until the second printing hits comic store shelves next month, slug it out with the other collectors on Ebay, or get yourself a digital copy.

Across the board this is the best reviewed comic I can remember, and to no one's surprise, it's coming out of Image. The "creator owned" comics company is creating an industry Renaissance, and giving readers exactly what they want, the uncensored vision of top creators, making Marvel and DC seem less relevant by the day.

However, the redundant, prevailing themes in comics are still alive and well unfortunately. East Meets West is a dystopian, apocalyptic epic taking place in an alternate universe. Initially I was less than impressed with another potential Hunger Games/Walking Dead type offering due to their rampant commonality and their tendency to almost always read like an inferior knockoff, but Hickman and Dragotta pull off a rare feat, a visually stunning issue one that does a great job of world building and creating a unique mythos while not getting bogged down in exposition.

Hickman's vision of an alternate America, consisting of seven nations that were created after a comet hits Missouri during the height of the Civil War, is definitely the most interesting aspect of the story. The setting itself, complete with a detailed map on the final page is worth buying the first issue alone.

In the reality of East Meets West, the four horseman of the apocalypse have come to herald the end of the world, fulfilling a prophecy shared by the major religions of two different cultures. The main characters themselves create more questions than answers, but admittedly, the questions are intriguing ones. However, these four horsemen lack a bit of originality in both substance and dialogue, and I felt that they weren't really breaking any ground in either of those areas. Regardless of whether this story is completely reinventing the wheel or not, it is the most interesting book to come out in months. Sometimes the critics get it right.

Just as a a visceral experience alone, it's 40 pages of ultra violent, bloody, highly entertaining sequential art goodness, a comic lover's wet dream. And as a setup issue, it sets the mark for an almost perfect effort. With time, the characters in East Meets West may get even richer and more interesting nullifying my only criticism of this new series. There is talk everywhere that Hickman and Dragotta may be currently writing one of the classics, and while it's still too early to tell, both should be lauded for their work on issue one. East Meets West is another must read book from Image. It makes events like Marvel's Age of Ultron seem almost laughable in comparison.
Posted by The Hammond Comics Blog at 10:10 PM