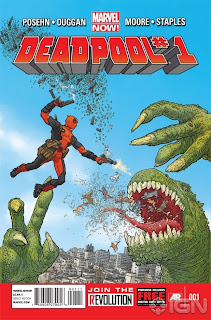 Okay. I’ll be the first to admit that I’ve never been a huge fan of Deadpool…not much of any kind of fan really. I can remember buying a few issues of one of his books way back in the day; say early to mid 90’s, not that I remember much. Deadpool quickly dropped off my radar and fell off the other side of who really cares. To be honest, most all other characters not related to or cloned from Spider-Man met the same fate. Geez cut me some slack, I was thirteen and mowing my neighbor’s yard and couldn’t support a full fledged addiction to comics.

I figured I’d just pick one super hero to follow. Thus, allowing me comics on the weekly and a few bucks left over for raising my hell fund. The Web Head won out. Needless to say, when I signed this contract for my soul to comicdom, I had no idea that Spider-Man had no less than four current running titles. Amazing, Spectacular, Spider-Man, and Web of said wall crawler, so yeah, more comics, less raising hell. Okay, I guess that’s not entirely true…..I just had to get more resourceful and raise hell outside of the box.

Good God… I’ll eventually get to actually reviewing a few Deadpool books sooner or later, I promise. Free of charge even (donations will however be accepted and go straight to my raise some hell fund)…no it won’t I lie. I’d buy more comics. Damn it! There I go again……focus jackass. 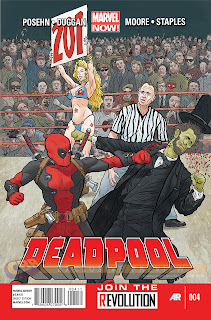 Issues 1-6 of Marvel’s newest re-launch of Deadpool are for reasons soon to be explained a must have. Don’t be a lame ass, go buy the trade when it arrives on the shelves. It is a laugh out loud (at times) journey to ridiculousness and back. Enter Undead Presidents of the United States of ‘Merica. You see…this guy aptly named The Necromancer, who happens to look like Grizzly Adams minus the bear and plus a kilt, has used his mighty tome of Black Magics to resurrect all the former presidents. Of course the poor bastard’s plan goes horribly wrong and the Mr. Presidents dip into their own raise some hell fund. George Washington takes control of the undead chiefs of staff and out of respect & fear, they do his bidding.

S.H.E.I.L.D. sends agent Preston to recruit Deadpool for the cleanup. Our merc with a mouth takes the job and goes hunting. The arc running feud between Deadpool and George Washington was fantastic and well done all at once. Actually, the Deadpool vs. Nixon bout in Issue #3 takes the award for awesomeness in a fight scene.

There is plenty of violence and plenty of hilarious corny one liners that one would expect in a book with Deadpool on the cover. The writing is really well done though. It’s not too over the top or anything. The balance between the HaHa-ing and the darker more serious side of the character have been to date, masterfully balanced. The art isn’t bad but it isn’t standalone either. I feel like this run is dangling dangerously on the edge of dumb as hell, and at any minute the momentum coming off the “Dead Presidents” arch could come to a lackluster plunge into the deep dark bottomless void of mediocrity that we lovingly refer to as the MU. I’m watching you…with squinty eyes.

Posted by The Hammond Comics Blog at 5:22 PM