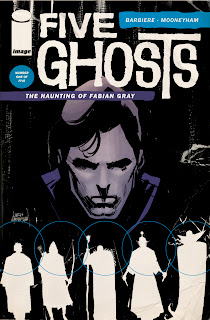 "After a tragic encounter with an artifact known as 'The Dreamstone', infamous treasure hunter Fabian Gray was possessed by five literary ghosts and has been granted access to their unique abilities"


Any amongst my readers (I'm assuming something there, but bear with me...) should have a good idea by now that I am a sucker for the Pulp genre.

With a shot of bourbon.

Pretty much anything, from The Shadow's mad cackling to the crack of Indiana Jones' bullwhip will pique my curiosity and almost guarantee a book sale, and Five Ghosts is no exception. A pulp era adventurer who channels ghost powers. Perfect.
He's even fighting Nazis by page two.
Call it stereotypical, but if it's good enough for Indy, Hellboy, and Atomic Robo it's good enough for me.

Fabian Gray is fighting Nazis because he, of course, infiltrated their Austrian mountaintop castle in search of an arcane knickknack, trounces them, and is sleeping with his beautiful client by page 6.
I. Love. This. Book.

In an unrevealed incident involving Fabian and the aforementioned Dreamstone it seems he was possessed by the literary ghosts of an archer, a detective, a vampire, a samurai, and a wizard and can invoke the particular skill-sets and powers of these ghosts to aid him in his endeavors. It is touched on that the same event that granted Fabian his powers rendered his sister comatose, fueling his motivation as an archetypical pulp hero to cure her affliction.

Oh, and it seems his possession is killing him.

Coupled with the fact that Fabian is pursued by what appears to be an undead fellow in a trenchcoat and fedora, as well as a demon or elder god worshipping cultist named Iago, fills out a few more pulp tropes and promises plenty of opposition for our hero.
Five Ghosts closes with Fabian and his bookish sidekick flying into Darkest Africa on a biplane in search of a "strange stone" and "spider gods and the like".

Issue one leaves us with the pair captured by a tribe of savages sporting multiple, spiderlike eyes.

Ticking off boxes on my mental pulp checklist, this comic is a giant robot and a tentacled horror away from being the best thing ever.

Gray is part Indiana Jones, part Simon Templar, and all pulp, and I couldn't be happier. The writing is solid, bringing to mind the linear, fast-paced nature of the genre.
Just like the dotted line on the map in Raiders.
Mooneyham's art is also spectacular and carries with it the slightly muddy, sketchy style of a Neal Adams, a Walt Simonson, or any other luminaries of the genre.
Mike Ploog comes to mind.

This book could use a bog-monster, speaking of Ploog...

Hopefully the next four issues of Five Ghosts pack the same punch as the first, and I'm certainly looking forward to finding out.
Posted by The Hammond Comics Blog at 8:38 PM