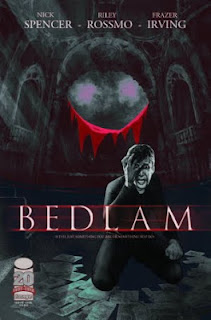 Pick of the Week: Bedlam. Okay, I’m not really going to steal any headlines here. Great art, not your standard serial killer schtuff, and a lot of book (double sized) for the $3.50. The only reason not to pick this up is because you can’t. Went into a second printing almost immediately, and the first printing was selling for $10 on Ebay a day after it was released.

Holding Strong: A vs X Consequences #4. With the relative dreck of the Marvel Now line that’s been shat out, I’m still amazed at what a nice narrative this is. It’s not easy to jump around and just give two pages of story to a character like Colossus or Namor and let someone really feel like they know what’s going on, but Kieron Gillan has been doing just that. And really, who doesn’t like Magneto best when he is lacing up his shit-kicking boots.

Why Won’t People Buy This Book: American Vampire #32. Okay, I know why. I wouldn’t have checked this out had not my favorite, doughy, comic reviewer hadn’t recommended it. Vampires have been played out. But though I recommend to the three people who frequent my comic shop, no one has moved towards it. Tight writing, nice art, and a great retro feel...nope, not for me, they say.

Still Pretty, But Not Much Else: Happy #2 and Fashion Beast #3. Both of these are mini-series, so I’ve gotta cut them some slack. I assume the writers focus less on making each issue accessible, but these both have a real “connective tissue” feel to them, rather than feeling like a functioning muscle. Happy #1, besides being a pretty book, had a clever way of setting folks up to be an assassinated, and the introduction of the little blue horse, but issue two...well, I guess we had to see him escape. As for Fashion Beast, I LOVED the first issue, which could have been a stand-alone comic, and even the second was intriguing in where the plot was going. #3, well, it just didn’t tickle like the first two, but I’m still going to take the ride to the end.

What Now? A+X #1. Did anyone really lament the lack of a Marvel Team-Up comic? Mediocre Marvel. One complete story, and one ongoing arc...both about time travel, which I generally find to be lame outside of Dr. Who. However, it does allow two Wolverines and two Hulks to fight, and I’m sure Marvel’s mighty marketing machine thought that was a good idea.

Huh, You Don’t Say: The Origin of Skeletor #1. Not courting the kid market with this one, DC gives up a hand painted, lovely comic with a pretty thin story. But if you like your men with swiveling hips, I suppose you’ll be into this one

Posted by The Hammond Comics Blog at 8:47 PM