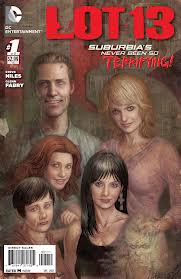 Oh yay! Another new title from D.C. that will likely be about as exciting as watching the golf channel; that I will end up hating. It’s not that D.C. doesn’t have any good books out (I’ve been digging Talon and still pull Dial H on the monthly). It’s just that I’m a Marvel Zombie as Mr. Will “Brass Cannon” Dubbeld put it so eloquently in his last review. Not that I buy every title that Marvel puts out, because I don’t. It’s just that Marvel’s characters are nearer and dearer to my heart than the Supermans, Wonder Womans, and most certainly Aqua Mans of comicdom. That being said, for the most part Lot 13 was better than a kick in the balls any day..

I’d never even heard anything about Lot 13 until I went to my local comic book establishment and found it had mysteriously infiltrated my folder. Shawn, the resident comic book wizard and owner of said shop, Comics Cubed, is cool like that. Knowing I write reviews he’ll randomly put the odd new titles and other books he has given the thumbs up on in my folder. Most of the times he’s justified in doing so, but, once in a while due to insufficient funds or lack of interest on my part, I put a few back. But with his “If you read it and hate it you can bring it back” policy, it’s really a win win. Anywho, let’s talk Lot 13.

Well, I believe the best part of this book is undeniably the artwork by Glenn Fabry. I liked his work on Preacher and Daredevil/Bullseye so it wasn’t really a surprise that his art stands out here as well. Most pages wouldn’t need the dialogue or side notes to understand what is transpiring. Fabry's facial expressions tell all. That is a sign of a good comic artist. Adam Brown’s color wheel is spinning as it should; his color work really sets the mood throughout.
I can’t say much about Niles’ writing. It’s not that it’s awful.It’s just this story has been done more times than you can shake a dead cat. 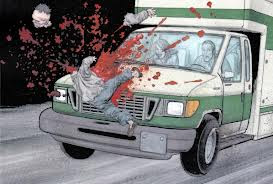 We start out in 1670 in the new world Fair Fax County, Virginia; for the first five pages anyway. Which happen to be the best pages in this book in my humble opinion. A man named Robert Wyatt is being posthumously tried for his apparent suicide and murder of his wife and three kids. He is found guiltily in the eyes of the court and their bodies are mutilated and dumped into a mass grave.

Fast forward to the present day. A family of five is moving out of their apartment. They get to their new house and it is being fumigated. Sans a place to stay for the night, the family hops back into their RV and goes looking for a place to rest their weary heads until the toxic fumes have gone the way of the buffalo. Then and only then can our little clan enter into their newly purchased slice of heaven. Anyway, they end up splattering some poor short bastard with a bulbous head; complete with a forehead the size of a small family car. When the family gets out to check the carnage, the splattered fellow has vanished. Ooooh. So, yeah, they pack back into their murderous RV and end up finding a couple of rooms for rent in a rundown apartment building (In the middle of nowhere).

Sooner than later, there is a knock on one of the kids’ doors. He opens it and there stands the splatter victim with an extremely pissed off look on his face. That’s it. By the time I was finished reading this book, I was glad. Being the open minded person that I am, I will read at least one more issue. Unlike some fella who writes for HCB, I can’t condemn a book after reading just one single issue, no matter how hilarious the timeline on the last page is. The verdict is in……..meh…I’ll get the 2nd issue for two reasons…

#1 I know the art will be amazing.
#2 Guy with the bulbous head. We could all use a little more head…

Posted by The Hammond Comics Blog at 7:58 PM