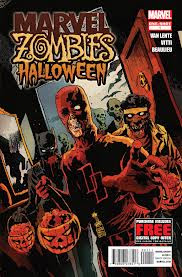 Well, it's that time of the year again. Leaves fall off of the trees, restaurants start offering pumpkin as an addenda to every confection, latte, or baked good. Little beggars scour the neighborhood for sweets and criminal mischief, and zombies overtake pop culture more than they usually do. Granted, All Hallow's Eve will have come and gone by the time this hits the internets, but I couldn't find a Marvel Zombie Thanksgiving one-shot to review, so hear ya go.

The Marvel Zombies phenomena launched in 2005, written by some Kirkman fella who I hear is peripherally involved in the zombie field to some degree. I dunno, I hadn't heard of him...
It seems that the Marvel Zombies idea may have started as a throw away miniseries that exploded into a monster all its own. Spawned from a story arc in Ultimate Fantastic Four (of all books) and spinning into 9 (!) minis, crossing over with the Army of Darkness comic book (which I did not follow due to my rabid hatred of inter-company crossovers) and finally plateauing with Howard the Duck battling Nazi zombies.

The whole thing is ludicrous, and I can't help but buy every stinkin' one. The term Marvel Zombie is doubly applicable here, as it is an endearing(ish) term of affection (I think) for Marvel's legion of fans who will unthinkingly buy every bit of newsprint the company produces, from the drek to the gems.

Anywho, my neverending hunger compelled me to buy this book and it slaked the ravening, if only for a moment.

Scribe Fred Van Lente was a familiar name, having written some of the other Zombie series and a pretty solid run on The Incredible Hercules. A pretty funny run, really.

His undead momentum keeps up in this one-shot, opening with exploding zombie heads and panning out to a dilapidated farmstead. Our protagonists are introduced, a mother and son who are fighting the good fight of survival horror like so many before them. The boy (Peter) finds a black kitten is the walls of the farmhouse, and soon after is explained the meaning of Halloween by his mother and she even rustles up a Wolverine costume for him.

Because, y'know, dilapidated farmhouses are lousy with child sized Wolverine costumes...
However, the mother states that Wolverine was, "always my hero", so a fun-sized snikters to anyone who guesses her identity.

Mom then boogied into town to find some candy for Peter and while she's away, Deus Ex Kitten gets out of the house and wanders off. Consequently, what's a young, plucky lad in a superpowered zombie apocalypse to do in such a clearly dangerous scenario?
Why, he sets off to go rescue his wayward kittie.

Alone.
In the dark.
In a Wolverine costume.
Well, it is a tried and true horror trope...

Young Peter makes his way to town, finding it strewn with corpses and abandoned automobiles such as you'll find in every zombie movie, and goes to the one house with lights on. The door is answered by a hook-nosed, gangly bearded fellow that you would expect to find introducing the stories in a Vault of Crypt of Terror Horror comic. Of Fear.

They have a brief exchange about how foolish young Peter is and how the man prefers Devil's Night over Halloween. He then slams the door in young Peter's face without so much as a "get off'n my property!" and that's when the real fun starts.

My most favorite part of the Marvel Zombie books is seeing the familiar cast of Marvel portrayed as horrible flesh eating creatures from Hell, and in the following page Peter is assaulted by a zombie squirrel.

Time for the crazy, people.

This time around I was treated to zombie versions of Karolina Dean (from the Runaways), Darkhawk, that metal guy from Avengers Academy, one of the Power Pack, and zombie Squirrel Girl.
Zombie. Squirrel. Girl.

Peter naively asks them if the horrid undead creatures have seen his kitty and then chastises them for being unloved dead selfish stupid heads. The zombie response is pretty much, "oh yeah? Well you're dumb, kid", and prepare for noms.

Mom shows up in the nick of time, and we are treated to the glorious image of Zombie Darkhawk getting his eyes stabbed out by a child in a Wolverine costume. That alone was worth the price of admission, folks. After a narrow escape, our heroes are cornered by a horde of zombie squirrels and all seems lost as the undead b-listers close in on the pair.

Luckily, as the clock strikes midnight, the Grumpy Old Man from before appears reciting lyrics from the Rolling Stones' "Sympathy For the Devil" and proceeds to smite zombie morts with hellfire.
T
urns out it was Mephisto.

Seems there are few souls left in the superhero zombie apocalypse and he seeks to preserve the ones that can still be corrupted, which I thought was a pretty deft storytelling move on Van Lente's part.

Van Lente does an admirable job on this one, throwing several horror cliches into the book and keeping the gallows humor that was prevalent in the previous Zombie series. I especially liked the fact that the core of his story was the importance of family, which is an excellent narrative device in the survival horror genre (see Walking Dead, World War Z, et al). The use of Mephisto as someone fighting zombies to preserve souls for his later despoilment was also really clever. I'd buy a miniseries based around that premise alone.

Vitti's art isn't bad, I've never been to fond of his style as everyone the same nose and cheeks. Nitpicky, I know, but for $2.99-3.99 a pop, I can pick all the nits I want. I didn't mind his art in this one-shot, however, as the whole ensemble cast was mostly composed of emaciated, rotting, or otherwise gangrenous characters. The cover was also splendid, depicting Zombie Daredevil, Zombie Black Panther, and Zombie Power Man partaking in some gruesome trick or treating complete with jack o' lantern buckets full of brains.
And I'm talking 70s butterfly collar-chain for a belt-tiara wearing Power Man, too.

Hopefully next year we'll be treated to another zombie apocalypse tale from Marvel. It was a welcome short story that distracted me from a bevy of mainstream capes and tights books and graced the world of comicdom with the visual of Darkhawk getting stabbed in the face, a win in my book.

Plus, Zombie Squirrel Girl was a treat.

Marvel Zombie Halloween was corny and dripping with cheese in places, but I'm eagerly awaiting the next book like a good Marvel Zombie...
Posted by The Hammond Comics Blog at 4:08 PM