"To know this story is to know Japan" 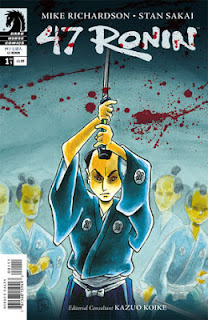 The tale of the 47 Ronin dates back to 18th century Japan, and is based on real events stemming from an incident involving a disgraced feudal lord and the quest of his loyal retainers to avenge his death. I'll not bog down the review with an in-depth history lesson and dissertation about the 47 Ronin, though I am sorely tempted to do so. Needless to say, it's a story about revenge, plain and simple. Samurai revenge.

This issue is all set-up for the main attraction, but is done in such a manner as to not bore the reader. The framework is laid with an (assumed) Ronin at a temple making an offering to the samurai buried there and telling his story to an inquisitive monk. Some years previous, Asano Takumi-Naganori, a daimyo, was summoned to entertain envoys who were visiting the shoguns court at the behest of the emperor of Japan. (daimyos were powerful territorial lords in feudal Japan, and the shogun was essentially a military dictator under which Japan was united. In a very generic nutshell). As Asano hails from a remote province and is largely ignorant of the intricacies of the shogun's court, he is to be tutored and thereby avoid dishonor as Japanese culture was (and is) steeped in etiquette and conduct. The problem facing our protagonist is his tutor, in fact, is a bag of dicks.

The tutor expects a hefty bribe for his efforts, and our Lord Asano refuses to pay the man for doing his duty, appointed to him by the shogunate. In response, the tutor endeavors to sabotage Asano's progress in hopes he will make errors in the intricacies of courtly etiquette in the face of the shoguns diplomats. In doing so, Asano will bring dishonor to his family, his lands, his name, his mailman, his dog, and anything else associated with him.

Because the Japanese take their courtly etiquette very, very seriously.

Matters boil over when Asano's tutor calls him a bumpkin country farmer, enraging the lord to the point he draws his blade in the shogun's palace and assaults the tutor. As the Japanese take their aforementioned courtly etiquette very, very seriously, this slight is punishable by death.

At this point, those unversed in the story should be able to divine why Lord Asano's 47 ronin embark on a mission of revenge, and on whom.

As I said, this issue is framework, merely setting the wheels in motion for the inevitable clash to come. Richardson, despite screenwriting Timecop, does a fine job here. From the opening scene with Asano and his daughter sharing a tender moment before his journey to his humble acceptance of his tutor's abuses until he finally snaps, you really feel for this hapless fellow. Richardson has a very blatant style, painting the heroes as heroes and the villains as villains without pausing for any grey areas to appear. Black and white storytelling will set the pace in this series, leaving no ambiguity as to who the good guys are and no sympathies for the bad guys.

Stan Sakai's art is, as always, excellent. I may be biased due to my adoration of Sakai's most famous work involving an anthropomorphic rabbit samurai, but I nonetheless find his art to be extremely expressive for it's seemingly simple line art style mixed with a look that is reminiscent of Japanese woodblock prints. It was also a treat to see it in color, due to the fact that Usagi Yojimbo is a black and white book.

Both Richardson and Sakai have put extra care and detail into the historical accuracy of the setting and characters, complete with footnotes, and those familiar with Stan Sakai's work will notice his theme of weaving history into his art and stories.

Mike Richardson ends issue #1 with an editorial about his 25 year love of the tale of the 47 Ronin and how the book came to be published.

I'll stick with this one for the duration. It's more in the vein of Akira Kurosawa or the Lone Wolf & Cub comic than a Sonny Chiba throwdown, and the extra care that Richardson and Sakai are putting into the book show through. Although the story is somewhat folkloric, it's historical and cultural status haven't really been explored in American media thus far and it's high time Western readers were made aware of this classic tale.
"To know this story is to know Japan" indeed.

Posted by The Hammond Comics Blog at 5:23 PM