The Shotgun blast...a quick look at what’s newly on the rack... 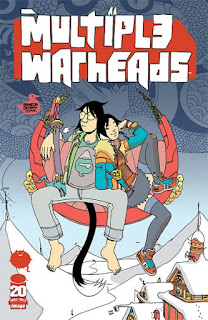 Top Pick: Multiple Warheads. A beautiful book, its 3.99 but takes awhile to mosey through. Brandon Graham takes his time too...thankfully the book is so beautiful you don’t mind the diversions and nigh incessant punning (often done in the margins of the pages). I’m really not sure why one of the main characters has a werewolf penis, or who the assassin who dominates the second half of the book is, but I’ll be happy to check out the next three issues.

The Biggest Disappointment: Ex Sanguine. Okay, I wasn’t expecting much, but this was pretty crappy. A vampire meets up with a serial killer. Yawn. And how the hell did she get off of her waitressing shift so damn fast? Crap. Not up to Dark Horse standards (though the Star Wars titles are fricking awful, so maybe I’ve been ranking them too highly.)

Biggest Surprises: Punisher War Zone and A vs. X: Consequences (1-3): I tried jumping in to the middle of the A vs. X stuff but it was too chaotic for me to follow and I sloughed it off, but I’m surprised that I enjoy following the aftermath, namely the imprisonment of Cyclops. Likewise, even though I had the first 12 issues of the original Punisher War Zone, it was at the end of the height of my comic buying and may have lead to it me quitting comics cold turkey back in the early 90s. Both series have a concerned Wolverine going out to council (Is that the appeal? I wasn’t overly impressed with seeing him say “fuck” in Wolverine Max).
Consequences is already a little off as Cyclops is at first trying to goad Wolverine into killing him and making him a martyr, and then fighting off the prisoners trying to kill him (perhaps he’s too vain to be offed by non-mutants?). Punisher doesn’t do a lot in the first issue of his series, but eludes Spider-man, who then gets the Avengers to decide to take him out. While neither is stellar, both have gripped me with little in the way of action, something Marvel hasn’t done to me in quite a while.

Surest Bet: I will read anything that ONI puts out. The new Stumptown series has impressed me and The Sixth Gun is as good as anything Mignolia does with Hellboy, and it’s a full half-step better than Dark Horse’s Billy the Kid title (which ain’t bad either.) As you’ve might have guessed, it’s kind of a reality blended with magic kind of Earth. I definitely want more. Bad Medicine was released as a Trade, but I’m not sure any more issues will be coming out, which is a real shame.

Wait and See: Talon and Ghost. I really liked the 0 issue of Talon, but number one has got some lame-ass dialogue and the revenge story won’t have legs on its own. Likewise Ghost had a strong 0 issue but shows signs of stumbling in the future. Really, it was just the last page of Ghost #1 that soured it for me...and I could very well be wrong.

Posted by The Hammond Comics Blog at 4:58 PM