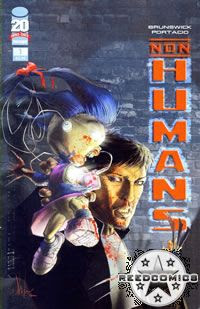 Sometimes you see a cover so good or mind-numbingly interesting that you have to take a chance on a new title. This is one of those books. Portacio’s art throughout this first issue alone, being top notch, as his work usually is, is the major selling point that will keep me pulling Non Humans off the rack. My only real concern is the duration of Whilce Portario’s presence with this title. Whilce has developed the reputation for being pulled from projects because of his inability to keep ahead of his scheduled release dates. So hopefully he will keep his mind fixed on the task at hand and finish the series. Non Humans is slated to be a short four issue mini so I have a hard time believing he won’t be around for the duration. You have probably seen his work in the Punisher, X-Factor, or most notably, the uncanny X-Men. He has also done work on Image’s Spawn and DC’s Batman Confidential. His list of credits goes on and on. After all, Whilce is a jack of all trades of sorts, as he does it all: ink, pencils, colors, and just about anything else comic book related. He is even credited with the creation of Marvel’s character Bishop, not to mention he is one of the seven original founders of Image Comics.

Well I guess I should at some point actually get around to talking about this issue, besides the magical eye candy found throughout. Glen Brunswick’s writing and character developments were also above par in my humble opinion. Most writers, try as they might, can’t accomplish this feat in one issue. You either end up with watered down or page after page of inner dialogue that never really seems to help the hapless reader identify with the character or characters ( that they are trying to get the world at large to invest in) at least on a personal level. Which, I’d have to say, is kind of the damn point, is it not? That being said, Brunswick has the rare talent for writing an entertaining ditty, not about Jack and Diane, but about inanimate toys, dolls, mannequins, and everything else “human like” given the spark of life and born into being.

Imagine a future Los Angeles snuggled into the world of Blade Runner where the androids are swapped out with toys. A “disease” has caused these “things” to be born of a person’s DNA and pieces of their personality, found mostly in adolescent kids. Because of this, the entire teenage population is forced by law to take drugs to keep the Non Humans from taking over the planet.
And that’s the low down dirty on Non Humans. It’s sure to be full of morality issues, racial issues, conflict on top of conflict, and of course fancy drawings. It’s going to be a great title and one I hope that helps me find respite in the soon to launch Marvel Now and one I can use as a crutch to limp through the wasteland of Before Watchmen, which undeniably is a cesspool of horse shit and cancer.

Posted by The Hammond Comics Blog at 5:36 AM