REVIEW: Billy the Kid's Old Timey Oddities and the Orm of Loch Ness #1 (of 4) 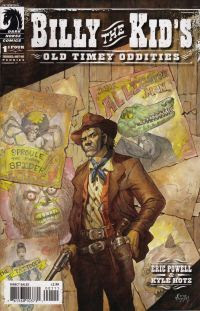 I didn't want to like Eric Powell. I really didn't. I'd read a review or a newsbyte, or one of Wikipedia's numerous misquoted or just plain wrong articles, and he came across as a real prick. Or was unnecessarily rude to a fan, or somesuch, I honesty don't even remember at this point. In any case I thought, "who the hell do you think you are, Eric Fancydan Powell? All high and mighty with your creator owned book and high falutin' pencils and script..."

It really galled me, too, because The Goon seemed right up my alley. All pulpy and supernatural, like Marv from Sin City had a smartass baby with Hellboy or something.
But no! Powell had...somehow...offended my tender sensibilities, so he wasn't getting a dime of my moderately hard-earned money.

Then the sneaky bastard wrote this Billy the Kid's Old Timey Oddities comic.

First a supernatural pulp book, and now a book about a cowboy outlaw and a band of circus freaks? This guy was really starting to get on my nerves, writing all these books about some of my favorite things in some of my favorite genres. Probably really good books, too...
But hell no, I wasn't going to buy them! Gimmie that mediocre Marvel book or some DC reboot crap or another!

A year or so later, Chris, one of my comic nerd alumni, says to me, "Hey, have you read this Goon book?"

After going a few rounds back and forth on the matter, he says, "Dude, it's so good. What if I GIVE you copies of it to read?"

Well, I do like free. And this way I'd only be supporting the villain Powell in an oblique sort of way. I relented, and after reading a few issues I'll be damned if this Powell fella was alright!

And just like that, my reaction shifted from Hostile to Friendly. I couldn't stop reading that damn Goon book. It jumped on to my pull list, and tpb's were ordered to get me up to speed.
Well played, Powell.

Since he already had his hooks in me, I figured I'd give his Billy the Kid comic a shot. I'd already missed out on the first couple miniseries, but as fortune would have it a brand spankin' new mini was out: Billy the Kid's Old Timey Oddities and the Orm of Loch Ness.
Which I promptly pre-ordered.

When the book arrived I was double pleased to learn that it was illustrated by Kyle Hotz, who's work I loved in Marvel's The Zombie and Annihilation: Conquest- Wraith. (ironically, The Zombie's second series was co-plotted by Powell and I loved it even though I was still on my Eric Powell Hate-Train).

After reading the issue, I was admittedly behind the curve as it alludes to prior event and doesn't recap events or reintroduce characters. I actually appreciated this, as far to often a book will fill space with "last time in Camelot 3000..." or other flashbacks that waste page space.

The story starts off with a mysterious crab-clawed man visiting a gypsy caravan outside of Louisville, Kentucky, who seeks information on Billy's troupe of freaks from an archetypical gypsy soothsayer.

It seems that one of Billy's Old Timey Oddities has been kidnapped and the rest of the lot is off to rescue him. Evidently this transpired in the previous series which took place in the British Isles, putting us in a convenient position to address this Orm of Loch Ness business. One of the scholarly Oddities relates to the reader the tale of Saint Columba and his encounter with the Loch Ness Monster, which was fairly close to the "real" legend of St. Columba (as if I wasn't off-kilter enough, I fancy myself a bit of an amateur cryptozoologist. Which is a bit like proclaiming yourself a professional gum chewer, I suppose)

The root of the tale involves heathen Scotsmen (the best kind, in my opinion) cowering in fear due to a Hellish beast that haunts their lake. Saint Columba appears and censures The Beast with the power of The Lord. All the heathen Scots rejoice and accept Jesus as their lord and savior and the beast slinks into the darkness of the loch only to appear every few decades for the viewing pleasure of a tourist or addled fisherman. Powell tells the same story for the most part, albeit his version involves more fire and ass-kickin' Irish monks.

Billy and his Oddities extrapolate that there is a connection between the lake monster and their missing companion who resembles some sort of lizardy, swamp monstery kind of fellow.
A bit of a bold leap in logic, I know, but what the hell.

Billy and Co. track their erstwhile companion and his captor to a picturesque Scottish hamlet and are promptly captured by the pitchfork and torch wielding locals who curse them as 'abominations from the loch'. Our heroes are promptly judged corrupt by the light shed from a relic lantern crafted from the skull of St. Columba, and the town's wrinkly old hateful priest condemns the lot of them to death by beheading...

The issue ends with Callahan (our kidnapped Oddity) being forced by his captor to swim down to the bottom of the loch into an underwater cave full of coffins and we are treated to a full page reveal of our villain who may also be the Loch Ness Monster.
I'll give you a hint: his name rhymes with Mackula.

For all the Powell-hating I've done, I sure aim to make up for it. Billy the Kid et al has all the irreverent humor and snappy dialogue of The Goon, albeit dialed down significantly, and although not much time is spent on exposition or character development it doesn't detract from the overall enjoyment of the book and helped the pacing.

Hotz's art is, per usual, excellent. He has a certain grotesque/Art Nouveau/Aubrey Beardsley quality that really makes it stand out uniquely amongst a sea of artists looking to ape one another's style.

This first issue was an extraordinary start to a promising miniseries. Of course, I'm a bit biased due to my aforementioned fondness for cowboy outlaws and circus freaks, but if Powell insists on writing comics with the sole intent of my purchasing them, so be it.

Now if he'd get cracking on that science fiction Lovecraftian chop-socky book we'd be in business...

Posted by The Hammond Comics Blog at 5:33 AM