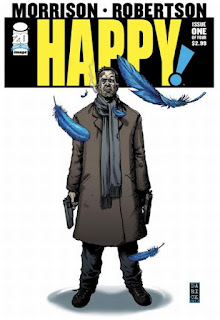 Well, everyone's (and no-ones) favorite Glaswegian writer is at it again, this time for Image comics. Say what you will about ol' Wacky Grant, the man certainly knows how to make an impression on his readers and consequently most people love or hate Grant Morrison's work. You'll find very few people who are on the fence in their opinion of his efforts. Having read quite a bit of Grant in my day I find myself one of the odd fence-riding few. Before I knew who Grant Morrison was (and, frankly, before he was anyone to speak of) I read his 'Gothic' story arc in Batman: Legends of the Dark Night and remember attempting to wrap my brain around the subtleties and implications of the work. As the years passed I realized that is what Morrison does: tries to wrap my brain around things.

His work runs the gamut as far as I'm concerned, from brilliant (his Dan Dare comic, We3, Marvel Boy) to so-so (New X-Men, Vampirella) to utterly self indulgent or nigh-incomprehensible garbage (Batman: The Return of Bruce Wayne, Doom Patrol, The Invisibles). Consequently I find myself almost inexplicably drawn to his comics out of almost morbid curiosity. Part of me yearns and hopes that the next story will prove as provoking and entertaining as All-Star Superman, and part of me dreads what could be the next Final Crisis.

Discovering Grant's latest endeavor was a miniseries for Image gave me some confidence, as I could read it without fear of Xorneto's or any number of other horribly conceived and executed assaults on my beloved superhero books. Learning that Darick Robertson (The Boys, Fury) was pencilling sealed the deal.
It was time to get Happy!

Happy! opens with a pair of mob guns-for-hire on the way to snuff out a man named Nick Sax, only to discover they are being hunted by their prey. The first twelve or so pages are a dynamic melange of bloody violence, graphic language, farcical sex and dark tone that seem to be lifted straight out of Garth Ennis' playbook.

After a shootout and a fairly inventive use of a newspaper and a prostitute we find Nick Sax wounded and in an ambulance on the way to a mob hospital. At this point Morrison pulls his David Lynch twist and Nick is visited by a cartoony blue, fuzzy, flying horse creature.

We learn via some cliche exposition that Nick Sax used to be the 'best detective in the whole department. Medals. Citations. A beautiful wife and a golden career' and something clearly happened that turned him from the path of righteousness down that dark road of bullets and alcohol.
Well getting a bit dry, Mr. Morrison?

After the aforementioned spoon feeding of Sax's backstory, we learn that the magical winged horsey is the imaginary friend of someone named Hailey (who is in some need of rescuing) and Nick Sax and said horsey are meant to team up and save her.
The real kicker is the imaginary equine's name is Happy the Horse. It's kind of amazing.

Issue 1 ends with Nick and Happy the Horse attempting to break out of the mob hospital before a squad of men arrive to torture information out of our hero.
For a four issue miniseries, Grant spends an awful lot of space on set up, and hopefully this doesn't press the story for space in the remaining 3 parts. The script seems well thought out and doesn't seem to betray any of the pretentiousness that seems to plague Morrison's weaker works, however. Robertson's art is excellent, as always, although I don't see the same dynamic synergy between Morrison's script and Robertson's art as I do with Morrison and Frank Quietly.

After reading through Happy! a couple of times I found the book to be engaging enough to keep buying, especially since it's not bogged down with continuity or any other baggage. It keeps you wondering (will Hailey be saved? Will the whole series just chronicle Nick's escape attempt? Is Happy a figment of his imagination?)
And Happy the Horse alone is almost worth the price of admission. He's pretty durn cute.
Posted by The Hammond Comics Blog at 9:14 PM