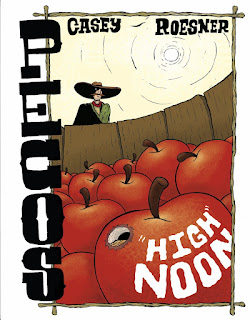 This past weekend I had the pleasure of attending the Wizardworld comic book convention in Chicago with the rest of the Hammond Comics Blog crew. This was the first 'con I'd attended in quite a few years, and I made up for lost time by spending way more money than I should have.

Numerous booths were present, highlighting the artistic efforts of talents ranging from luminary Neal Adams to those unheard of by the general populace. One of these booths belonged to an independent publisher called Yeti Press. I have a soft spot for indy books (although many of them are admittedly horrid) and the young lady hawking the wares at the booth convinced me to purchase the first two issues of a book called Pecos, described as a 'comedy western'.

Pecos spins the yarn of American folklore figure Pecos Bill. For the uninitiated, Pecos Bill is prominent character in tall tales from the turn of the last century, similar to Paul Bunyan or John Henry. The comic seems to paint Pecos Bill as less of a folkloric hero and more of an outlaw cowboy who would fit right in to the finest Spaghetti Western. The first issue finds Pecos around a campfire with three other cowpokes who take turns telling tall tales about Pecos Bill in exchange for the remainder of a can of beans. Exploits ranging from killing over a hundred men to robbing a bank during a tornado are told to the reader, and at the end of the book our three storytellers are left to share the remainder of Pecos' supper (consisting of a single bean) as he finishes out the cowboy trope by walking into the sunset.

Pecos was a rather short (16 page) book, but this is understandable considering the artist and writer are probably paying for it out of pocket with whatever money they can cobble together. The book is oversized with a color cover and black and white interiors, and the penciling quality is fairly good. It isn't up to the caliber of most books, lacking a true understanding of depth and shadow, but it has an endearing cartoonish quality that puts it head and shoulders above many other independent books that have a slapdash, almost lackadaisical approach to the art. There's some fairly good gags in the book also, my favorite involving Pecos lassoing a bullet out of the air during a gunfight.

According to the Yeti Press website Pecos only has two issues available, but it did have a smattering of other titles available that might bear looking into. Although the art and writing aren't as sharp as what you might find in a larger press book, I found myself enjoying Pecos much more than several books I could mention from world famous publishers.

Namely the Before Watchmen prequels...

Posted by The Hammond Comics Blog at 4:20 AM