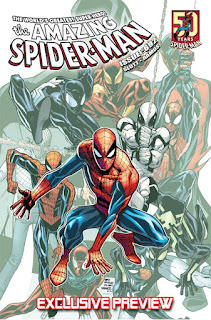 So the web slinger has turned the big 50. In this day and age of throw away entertainment, that’s quite an accomplishment in any medium. Amazing Fantasy #15 is where it happened, Aug 1962 is when it happened. As a die-hard Spidey fan, I am damn glad it did.

This double issue is jam packed full of good times.
We are introduced to a new face in the 616, Andy Maguire. Andy is an outcast bottom feeder at Midtown High. Andy’s science class is on a field trip to Horizon Labs to watch a demonstration by none other than Peter Parker. He is demonstrating a clean, affordable, near limitless hyper-kinetic form of energy, thoughtfully named “Parker Particles.”

Alpha becomes, in effect, Spidey’s side kick. He learns the in’s and out’s of the super hero biz. The issue closes with the Fantastic Four sending out a call for help to Spider-Man. When Spidey shows up, the F4 are battling Giganto, whom Alpha takes out with one punch. The last panel of the last page gives us a glimpse of devilish things to come. Enter the Jackal (possibly the scariest villain in the Spider’s stable. Not that he’s an Alpha or even an Omega, it’s because he’s the “clone maker”).

All in all, very good issue. Ramos’s art was great as usual and Dan Slott’s writing was refreshingly engaging. 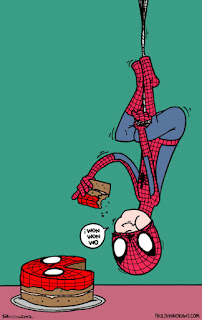 We were also blessed with two shorts at the ass end of this book. The first “Spider-Man for a Night,” takes place right after Spidey throws his costume in an alley trash can in ASM #50. A bank robber, running from law dogs, finds it and uses the Spidey duds to elude the police. He wears the costume on another failed robbery. In the end, we learn that he’s really trying to get enough money to pay for surgery for his granddaughter. He ends up putting the costume back where he found it. Meh……they could’ve left this one out.

The second short, “Just Right,” is better than the last, but in the end just another “feel good” piece. Spidey and a young boy just tooling around a bit. The Thing shows up and makes a few funnies about a pigeon dropping a bomb on Spidey’s head. That and Nuno Plati throwing in the Spider Buggy on his two page spread being the highlights. After reading the letters page (which is very good in this issue) I found myself wondering if Spider-Man would be around for another 50 years. I truly hope so. Happy Birthday Spidey.

Posted by The Hammond Comics Blog at 6:21 AM