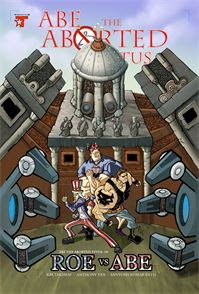 Today I am writing a book that goes beyond controversial, and celebrates in middle school, adolescent, button pushing. Abe the Aborted Fetus is the only book to ever be banned from Facebook. And while the title rightfully foreshadows subject matter most heinous, the tale contained within has something to offend people on both sides of the argument.

While I do not necessarily condone the content, I did have a chance to meet Z.M Thomas and discuss this project with him and get his opinions. And even after all of that I feel like Abe the Aborted Fetus has some pretty effective satirical moments, but is deeply flawed.

As a reformed Catholic myself, the book centers around the inherent hypocrisy of the Catholic church, a repetitive, forgotten dogma whose literal translation eludes even the most devout Catholics. In addition, the corruption of the childhood sex scandal and subsequent coverup will never fade, as did the once all encompassing tableau and political machine that once ran the medieval world. Both have made the church much less relevant today. This is a work that aims an arrow at the absurdity of the modern day Catholic Church. That might have been the only part that I had no problem with when I finished reading the final panel.

Abe the Aborted Fetus saves himself from "Dr. Choice", and then donning Men in Black style spy wear, catches himself in the middle of a very real abortion war between the right wing of the United States Government/ the majority of Christian religious sects, and the political left. I find myself conflicted, and I'm not even sure if that synopsis even makes any sense to someone who hasn't read the book. To slightly stray into politics a bit, I am pro-choice, but not a fan of abortion. This one went a little far in it's juvenile one liners about a subject that causes real women very real pain. The condescending sabre rattling got old quick here, but as a fan of dumb humor I felt that the jokes themselves were solid. There were in fact moments where Z.M Thomas got in some nice digs on the left as well, but those were peppered with a few "Dixie Normous" toss outs that kept this one from ever getting close to the next level.

The truth is that I hate discussing this issue because women will never relinquish control of their own bodies regardless of legislation. It can be argued that writers like Garth Ennis are way more controversial in terms of their content, but the difference between Ennis and Thomas is that they're both actively trying to offend the reader in different ways. While Ennis is page after page of sick, twisted, sex and violence, the political overtones in this work do not seem to accomplish their goal. I understand that opening a dialogue with Jesus Camp attendees may seem to be a fruitless task, but there is a tendency to bash Christianity in all forms in America, and for that to be acceptable to the liberal masses. These are the same people that would be enraged if the subject were switched to a book about the absurdities of the Muslim religion, or the Jewish one for that matter.

Dr. Choice uses a coat hanger as a medical tool in the first few panels. That I found to be in extremely poor taste. Depicting doctors that perform abortions in this manner fuels the ignorant views of the right wing, and is extremely hurtful to the writer's cause here considering that before this medical procedure became legal this was how abortions were frequently performed.

And here I am talking about the story the entire time for obvious reasons, but I have to say the art was excellent, almost Guilliory-esque. There are panels here that are hard on the eyes though due to the subject matter. I could have lived without Abe waking up in a garbage can of aborted fetuses. Yeah, caveat emptor on this book. While the book was well thought out, masterfully drawn, and had a few redeeming factors, I could have left this one on the shelf. I am even filled with hesitation to post the cover on our website, but the work deserves a review, however milquetoast. If you like humor that reads like Weird Al without a soul, than this book is definitely one you want to buy right away. Anyone standing up and willing to debate ideas deserves respect, but this book does not do that. Z.M. Thomas seems more concerned with prodding the religious right/Catholicism than making a valid and cogent argument. If you want to debate abortion on any level, you need to have respect for the subject matter. Period.
Posted by The Hammond Comics Blog at 6:34 AM