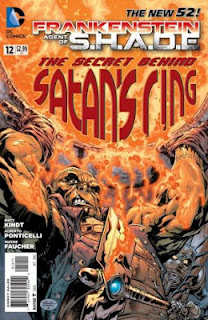 In the wake of DC's most recent ctl+alt+del reboot of what can loosely be called continuity, I've discovered a few gems (Suicide Squad, Shade) amongst the chaff (Stormwatch, Deathstroke). Frankenstein, Agent of S.H.A.D.E. is one of these gems.

The current incarnation of Frankenstein in the DCU is based on Grant Morrison's reimagining of the character from his Seven Soldiers of Victory maxiseries mixed with the Creature Commandos feature from the old Weird War Tales book from the 80s. Having been a lifelong fan of Universal Monsters I immediately took a shine to this book. Frankenstein leads a team of monsters that consists of an archetypical werewolf, vampire, ancient Egyptian mummy, and a female Creature From the Black Lagoon-like gillman (gillgal?). The mummy is a wise king-priest sort of wizardy fellow, the gillgal a scientist, and the werewolf and vampire round out the team as roguish front line fighters along with Frank, who wields the sword of Archangel Gabriel or somesuch as the team roots out otherdimensional evils and supernatural weirdness under the auspices of the S.H.A.D.E. organization. I was initially drawn to the book due to the similarities with Marvel's dearly departed Howling Commandos series from the early 2000s that operated under a similar premise of monsters working for a clandestine organization. Having come to terms with the fact that the Big Two continually ape each others plotlines, I proceeded undeterred.

Buying this book is as good as buying a one way train ticket to Wackytown, I kid you not. The first arc found the team waging war against mountain-sized otherdimensional critters on their home turf and the book hasn't slowed down in the slightest. The current arc (titled 'Son of Satan's Ring) has Frank and Company on the trail of an agent of S.H.A.D.E. who has gone rogue and is hiding out in a community for secret agents that is in the belly of some sort of biblical leviathan.

Sword in hand, Frankenstein throws himself like so much Jonah (or perhaps more accurately Pinocchio) into the belly of the beast and sets out to find the traitor.
Allow me to share a passage from the issue:

"The leviathan graveyard has been the mystical resting place of dying leviathans for millions of years. The enchanted marrow from the thousands of leviathan bones creates a wet-membrane that generates a perfect underwater paradise within its protective bubble."

Admittedly, this book is full of oblique commentary and dialogue like the above passage, but it spins it in such a way as to not alienate the reader. Peppering the pages with scenes of Frankenstein's Monster cutting a swath of destruction through mobs of giant insects (called Scare-ebs) helps to counteract the sometimes sluggish narrative. Interspersed throughout the book is panels of Frankenstein having flashbacks to the past lives of the donors of his various pieces-parts, providing an interesting facet to the character that I'd not seen previously. The book ends with a full page spread showing Frankenstein at the head of a S.H.A.D.E. army on it's way to wage war against Victor Frankenstein and The Rot. I'm lead to believe this is the harbinger of some sort of Frankenstein/Swamp Thing/Animal Man love triangle crossover, and I'm fine with that.

Once more, my spirits are snatched from the gnarled talons of horrid comic limbo by an off-the-wall treat like this book. In the current status quo of Watchmen prequels and Marvel's bright idea to give Spider-Man a sidekick, it's a breath of fresh air to find a book that isn't reliant on mega events or super gimmicky storylines to drive the plot. Granted, I'm a sucker for monster books and supernatural goings-on, but I'll recommend this Frankenstein comic to anyone looking for a break from the regular capes and tights routine.
Posted by The Hammond Comics Blog at 6:25 AM