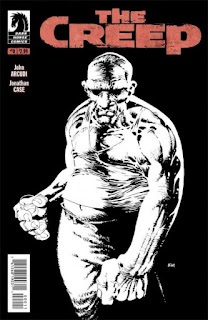 Okay, really. In our heart of hearts we know that most comics are crap. We can defend it only by pointing out that most of all mass entertainment is crap.

But it does irk one when hugely hyped projects (and projects with great potential) fail: like the Before Watchmen series, which so far has had a bright spot (Nite Owl #1) and a few dim spots (Nite Owl #2, The Comedian #s 1 and 2 and the Ozymandias #1), but is mostly dreck.

In Ozy #2, which is still a beautiful book, I can no longer forgive the somewhat trite background story of issue one, now that I’m forced to read interior dialogue from the “Smartest Man in the World,” which reads like it was written by a precocious 6th grader:

“I pulled my sleek sports car to an easy stop outside the city’s most exclusive club.”

You think a man of his intellect would have read a freshman creative writing primer to learn that adjectives don’t make for compelling writing.

Oh, and he makes numerous quips referring to criminals as “garbage.”

But my purpose here is not to praise, nor bury, a man who dresses like Caesar.

Rather, I come to tell you of The Creep #0, the best book I’ve read in the past few months.

And really, it’s harder to praise this work than criticize others, as its quality seems effortless. Story and art work together to tell a story that lets me know what I need to know.

It’s a pretty straight forward noir piece about a detective, but I know how the protagonist feels, and I know how he came to be where and how he is. And I actually care what happens next. The incidentals of his malformity, and the plot of an ex-lover and her son who committed suicide are the excuse for this particular comic, but the idea is less important than the implementation, and it’s somewhat sad that something routine has become for me the greatest breath of fresh air on the comic racks.


Posted by The Hammond Comics Blog at 8:08 PM