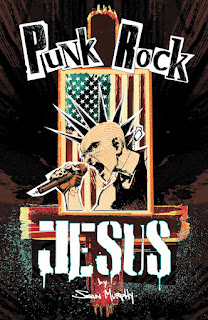 “Wow”…..that’s what I said when I came across this little gem. The title alone made me snatch it off the shelf and the punk rocker screaming into his microphone, dog tags flying, his liberty spikes standing in defiance of not only gravity, but the world at large, made me want to snuggle with it and make it my own. Having limited funds at the time, I had to put the newest comedian book back, but I can always pick up one of the twenty or so copies that still fill the shelves…or not. I have to say, the BW had been more than a little disappointing to say it nicely. Comedian’s title being the best so far, in my humble opinion.

Now beyond the shock value, at first glimpse the title and cover of Sean Murphy’s new creator owned book, there was the fact that in my misguided and angst filled youth I once wore the spikes, studs, patches, and combat boots that are the standard uniform of punk rock. I have no regrets. We raised a lot of hell and had many epic journeys traveling around to various punk rock shows. So yeah, now we have a bad ass cover, catchy title, and smoke tendrils of nostalgia. But what about the steaming bowls of Punk Rock Jesus? What about the comic Jerk off? Just how Punk is the son of God?


The first page of the comic (not the Bible) opens with a man and his wife and son having prayer before they eat their vittles. The first page ends with the father unloading an assault rifle over the table out the window. When the shooting ends, the boy, Thomas, is the only one still alive. I’ll get back to Thomas in a few.
Twenty-five years later, a company named Ophis has come up with the J2 project. Ophis has made some kind of a deal with the Catholic Church to use the shroud of Turin to extract Christ’s DNA. With the help of Noble Prize winning scientists, they plan on cloning the first human in history and filming it for their new reality show. It just so happens that this first human clone will be Jesus Christ. Ophis held auditions across the country for a teenage virgin female to carry the egg full of controversy to term. Now we get back to Thomas. Thomas McKael, ex IRA terrorist, now head of Security for the J2 project. To be honest, Thomas really didn’t have much to do with this first issue, except that his family was murdered and he beat up a few Christian protesters. He didn’t really get much face time. Maybe he will in the next issue.

Well, the day comes and (live on TV) out comes the clone of Jesus. They name him Chris. After the cameras go off, we learn that Chris has a twin sister. She was hidden because the network wants a blue eyed man clone of Christ, not a daughter, after all, that would be bad for ratings……..on the last panel of the last page, we see the network goon dump the baby girl into the ocean.

So yeah, “Wow” is what I said when I first found this comic and “Wow” is what I said when I finished reading it. I love controversy and this title is packed fill of it. I want more and I want it now. This first issue is sans all things punky, but hopefully that comes later. Well done Sean Murphy, well done. Now if you need me I’ll be at church and in the meantime ask yourself WWPRJD.

Posted by The Hammond Comics Blog at 7:52 AM