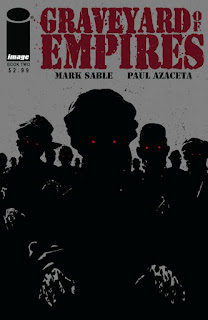 Friday hits, and the Wednesday books are all gone. That thirty to forty dollars a week sure goes quick, but to the hardcore comic junkies out there, comics equal crack rocks. Friday lunch hour was upon me, and one of the benefits of supervising yourself is that eating a sandwich at my desk does not count against my break, and if I come back a few minutes late no one will ever be the wiser. There is a large comic shop right across the expressway that comes in handy at times like these, and with all my pull books for the week spent, I often find myself sifting through the racks for runs of low key limited series IDW or Image books. And finally, this is how I arrived at Graveyard of Empires.

The title itself is intriguing. Three empires have broken their backs upon the mud huts and mountains of Afghanistan. And I am a sucker for a good war comic. There sat issues one and two of the four part series, ripe and ready for harvest. Not having a chance to catch any of the solicitations before purchasing and cracking open issue one was hugely beneficial for me with this series. I knew Paul Azaceta from his work on the much maligned Superman arc Grounded (Correction: wrong Grounded.Paul Azaceta did not work on the Superman Grounded Arc. He did work on another Image series of the same name). That was all the info I had going into this one.

Graveyard of Empires starts as a pretty typical war book, which isn't necessarily a bad thing. I have always been into comics, but it took a degree in English literature to fully appreciate the art form. The majority of my Professors were pretentious and loved nothing more than pissing elitist snobbery of the highest form into the ears of the "Philistine" student body that unfortunately couldn't miss more than three lectures without failing. I really developed a deep seeded prejudice of everything academic from my University experience. I took solace in comics, mostly because the majority of them did not take themselves too seriously, and that made the good ones even better in the end. GOE was an entertaining read right off the bat. Not every single book out there needs to reinvent the wheel. Some of them are the equivalent of good comfort food. This one was action all of the way. One of the strengths was that you could tell there was a good amount of research done, and the cultural tidbits thrown in made it even more entertaining than your average war book.

And then out of no where came the zombies. If I would have caught the solicitation for this series I never would have bought it that day. You heard it here first, zombies and vampires are officially played out. It is time to get yourselves some fresh ideas. But surprisingly enough, the zombie Taliban and American soldiers were a good twist here. Two issues in and I was completely hooked. The only problem now was that the release dates were extremely far apart, to the point where I would have to grab the other two and sit down with the third in order to enjoy a single issue. Limited series' like Rasl, Hawken, Mondo, and Graveyard of Empires really suffer when there aren't regularly scheduled release dates.

The fourth issue was a little rushed and disjointed. There were some nice flash back panels of British Empire and Alexander the Great occupied Afghanistan, but I found it a pretty disappointing ending to a series that had a potentially high ceiling. The art was great, and the story even better. Image definitely bungles the release dates on some quality work here, but they still put out the most interesting books out month after month, and everyone makes mistakes. You're going to probably have a hard time finding all four issues in your local shop, so your only options here are EBAY or wait for the trade unfortunately. I don't know if GOE was "well worth" the wait, but with all four issues in your hand this one will hit the sweet spot if you like a good war comic.

Note: Check out the correction above. And one last thing I should mention, Mark Sable was kind enough to read our review, point out my mistake, and did a mea culpa regarding the erratic release dates; falling on the grenade for Image (pun intended). WRDJ
Posted by The Hammond Comics Blog at 7:31 AM