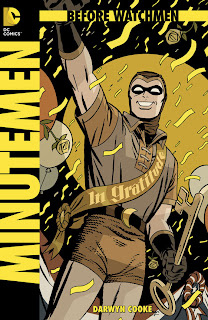 Minutemen #1 by Darwyn Cooke kicks off the most controversial release in the history of the DC Universe: Before Watchmen. The debate has been raging on Twitter and internet message boards for months. There can be no doubt in the mind of any comic fan that the conception of this series was mostly a corporate money grab, and that the mere existence of Before Watchmen without the consent of Alan Moore is an affront to the legacy of his seminal work; a work that is also one of the most successful books in the history of comics. The ownership of Watchmen will contractually transfer to Gibbons and Moore after the series has been out of print for one year, but today we know that DC will never relinquish the rights to the series. Neither of them knew that Watchmen would bring the term "graphic novel" into the mainstream, and that their "graphic novel" would elevate the legitimacy of the medium, eventually even earning a place on university English course syllabi. The reality is that Watchmen will never go out of print; therefore the rights will never be transferred back to the creators as was originally intended when the contracts were signed over two decades ago.

To those who believe that purchasing this book condones a gross violation of the spirit of their initial contract, Minutemen is not going to change any minds. I find myself conflicted about the existence of this series. While I agree that Moore is indeed being exploited by DC, it seems that these days he loves nothing more than throwing rocks at the throne, and because of this resentment his work has suffered. The golden age of Watchmen, V for Vendetta, From Hell, and Top Ten ended years ago, and it seems that where genius once reigned, that same genius has now been prematurely replaced with spite. Moore is justifiably angry; he did sign a bad contract, but Simon and Shuster signed an even worse one. Alan Moore had no moral qualms about his contribution to the Superman universe: What Ever Happened to the Man of Tomorrow. There is slightly more than a twinge of hypocrisy here that cannot be dismissed, but this hypocrisy is surely not a vindication of DC in any regard, even considering the milquetoast endorsement of the series by artist David Gibbons. It leaves in it's wake an extremely complicated dichotomy worthy of further discussion.

Minutemen is arguably the least offensive offering to Before Watchmen. The original Minutemen were a necessary subplot in the original work, but the characters of that reality's yesteryear were not largely developed by Moore with exception of the Comedian. Darwyn Cooke does a near perfect job with the art, reminiscent of his earlier work on New Frontier and The Spirit, and issue one stands alone as an engaging prologue to the burgeoning series. A homage to the golden age of square jawed heroes and pin-up knockout female heroines, Minutemen is a necessary addition to the collection of any serious noir fan regardless of their Watchmen political leanings. The Len Wein/ John Higgins two page Crimson Corsair epilogue is a visually stunning contribution, but not much about that series can be determined in two pages. To make a judgement of the work in toto, every single issue of Before Watchmen has to be purchased, or you're going to have to wait for the inevitable collected edition. Dan Didio knows how to market comics, no one can dispute that fact.

A familiarity with Watchmen is not necessary in order to enjoy Minutemen. The structure, art, and story are executed brilliantly. The only Minutemen who are not delved into in great detail at the end of issue one are Captain Metropolis and Dollar Bill, but the story manages to use all 22 pages as effectively as possible despite these omissions, and there are still five more issues left to further develop the characters. Not much can be said about Before Watchmen as a whole after the release of only one issue, but it is safe to say that at least the Minutemen portion will be an enjoyable read; and a welcome addition to the Watchmen universe for many fans, including myself. But Watchmen purists will never be swayed, and the logic of their argument cannot be denied even though Before Watchmen will undoubtedly be the best selling series of 2012. Moore's legacy will live on through Darwyn Cooke, Brian Azzarello, Amanda Conner, the Kuberts, Len Wein, Lee Bermejo, J. Michael Straczynski, J.G. Jones; and Alan Moore will spit sanctimonious venom all over every issue. It is also safe to say DC will continue to happily count every dollar with blood on their hands, and a completely clear conscience.

Posted by The Hammond Comics Blog at 3:42 PM