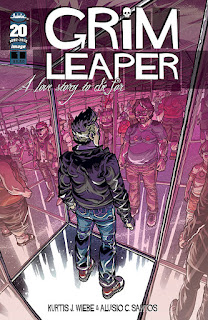 Lou Collins is a man with serious issues; issues yet unknown. Lou keeps getting killed, but the kicker is that instead of staying dead, Lou comes back. He sheds his mortal coil, and finds himself in the proverbial hallway with the white light at the end. Lou’s hallway happens to be filled with pictures of random people. As Lou walks past them, one of the portraits always comes to life and swallows him whole. The person in the photo that eats him, and he comes back as them.

Soon after being decapitated by a semi tire, Lou gets gobbled up by a photo and he comes back as Paul Daniels, contestant #2 on the reality dating game show “Take a Leap". Lou does his best to wreck the show and ends up getting booted. He then finds his way to the Brass Monkey, his favorite bar, where he meets a woman afflicted by the same dying impairment. On the last page, Lou falls in love and then he watches as his newly found flame falls down an open man hole to her death.
I have to say, I really get Kurtis Wiebe’s writing. I’m not talking about the plot or storyline. I’m talking more about the way Kurtis views the world, and the contempt he holds for the garbage we know as reality dating shows (Rock of Love, Bachelor, etc.). I also can relate to how he writes in Lou’s inability to find his way out of his hometown. Lou, however, will never escape.Every time he dies, he comes back there. So yeah, on a personal level I can relate to Lou’s tribulations (except the body snatching of course).

I’ve already found enough cliffhangers that I need answers to convince me to pick up the second issue. What happens to the people who Lou body snatches? Why is this even happening?

Even though I am already a fan of Kurtis Wiebe’s Green Wake ( horror mystery), and the Intrepids (a James Bond type action series) books, it is the art that will secure Grim Leaper firmly upon my pull list. It’s not even the drawing, which I can find no fault in, but Santos’ color work that sets Grim Leaper apart from the pack. I can’t even throw down a comparison or any adjectives that will do it justice...except ultimate eye candy. Aluisio C. Santos just earned a spot on my favorite artists list, and it’s about time too because I know he’s been losing sleep over it. Tonight he’ll sleep like a corpse and perhaps have some kind of kinky wet dream. I know I will.

Posted by The Hammond Comics Blog at 4:33 PM