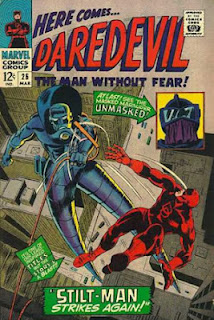 It is with some trepidation I write this review, as it seems like more of a eulogy than a critique. Gene Colan was an artistic visionary whose work for Marvel Comics from 1948 to the 1970s is chronicled in this visual biography, starting with his first story for a crime comic called Lawbreakers Always Lose. We follow along, chapter by chapter with a brief bit of exposition followed by examples of Colan's sublime art, be it interiors, covers, unfinished pencils, or sketches. The sketches in particular are superb, and honestly, if you compare Mike Deodato's work to Colan's sketches they look strikingly similar.
His work for Marvel consisted of super hero books, crime and horror, satire and romance, and each book he illustrated had its own unique feel, its own life and personality.

His 40s and 50s work showed more of his ability as a cartoonist, but as soon as we're exposed to his art from the 1960s and 70s we realize what a dynamo he was in the field. Some of it seems very derivative of Jack Kirby's art, but I can safely say that nearly everyone in comics was attempting to ape Kirby's style in those days. The section on his work for Sub-Mariner is exemplary of this, but as soon as the book takes us into Colan's work on Daredevil we see how much he evolved. His use of light and shadow, off-center angles, and cinematic character poses launches him to a level of artistry that is still enviable by even today's jaded standards of hyper-realism and computer aided art. I'd respected Colan's work for years, but this book gathers highlights and jams them together in such a way that my brain was almost overwhelmed at a couple of points.
As ludicrous as it sounds, the first instance of this was brought about by an unused cover for Daredevil where the Man Without Fear is squaring off against Stiltman.

I'll say it again: Stiltman.
One of the most laughed at, jobbed out morts in Marvel's catalogue.
This cover, however, blew my mind.
Daredevil fighting Stiltman, incredibly high above Hell's Kitchen, buildings laid out below in multiple point perspective, and I suddenly realized that I would not escape this book until it was finished.
The next chapter details his work on Doctor Strange, where nearly every page was a single or double page spread of the Sorcerer Supreme hurtling through a starscape or astral plane with swirling eddies of mist and arcane geometries populated by demonic foes and cosmic superbeings. Following that is his work on Iron Man which highlighted his ability to draw the character clad in armor that looked less like a suit of clunky plating and more like a second skin. Most impressive was Colan's ability to express emotion through Iron Man's featureless faceplate.


The final two chapters highlight what could be considered the crowning achievements of Gene Colan's career: The Tomb of Dracula and Howard the Duck. Colan illustrated the entire Dracula run, some 70 issues, and was able to keep a consistent eerie quality to the gothic horror comic. His ability to draw expression and emotion is strongest in Dracula and Howard the Duck. You wouldn't think that an anthropomorphic duck could be drawn in such an emotive manner, but Gene Colan will prove you wrong.

The book closes with a 1995 interview that editor Clifford Meth conducted and touches on many points in Colan's career, including his introduction into the comic world, advice he received from Jack Kirby, and his first meeting with Stan Lee. The interview is punctuated with a whimsical self portrait sketch of Colan showing him in his later years, a bespectacled, bearded, smiling figure that emotes feelings of a friendly, almost grandfatherly man that made me smile along with him.
Gene Colan died in June, 2011, another in an ever growing list of revolutionary artists that have recently passed away, amongst them Joe Simon, Jerry Robinson, Dave Cockrum, and Moebius Giraud. He will be missed, but he left an indelible mark on the modern comic book that is unlikely to be surpassed or overshadowed. The Invincible Gene Colan is an apt title for this book.

By: Will Dubbeld
Posted by The Hammond Comics Blog at 6:10 AM