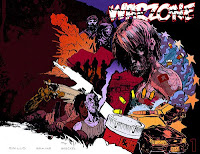 This week I got the chance to interview “War Zone” creator and writer Jesse Grillo. One night I was bored and randomly typed in “comics” on the Facebook search engine. Out of the menagerie of results, one in particular drew my fancy; Bleeding Ink Productions. After checking out Bleeding Ink’s Facebook page and seeing the pages from Jesse’s comics, I instantly became a fan. I messaged the man himself about how I could purchase one or more of his books so that I could review them for the HCB. The next thing I know, I am staring at five of the most original and interesting comics, dare I say, that I have ever read…and trust me I have pawed more comics than you can shake a dead cat at. On top of the free comics, Jesse was kind enough to agree to an interview. Now I have never interviewed anyone for anything, so if it leaves you wanting, that’s on me not him.

Out of the five titles he sent me (Demigods, Sensory Distortion, Chapel, Patriot, and War Zone) War Zone I felt was tits above the rest, but each one had a special something. I plan on giving each one a proper review in the future, but for now, this is what you get. 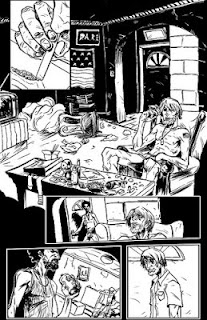 War Zone introduces us to our man Johnny, a veteran suffering from post-traumatic stress disorder. If that wasn’t enough, life it seems has kissed Johnny with the business end of a meth addiction. That’s where it all starts. Johnny and his buddy Ray are on the way to score from their dealer Ricky. When they get to Ricky’s all hell breaks loose. Enter bad cops, bounty hunters, biker gangs, and spirits of old friends. This comic had it all non-stop action, great writing, great pencils by David Brame, top notch coloring by Heather Breckel, and a overwhelming eerie bleak realism that I have seldom seen in a comic. Up until the last page, I found myself thinking that this could actually be a true story…..yeah, I know, like I said, Jesse’s got skills and he plays for keeps.

Madman: How many issues of War Zone do you have completed or plan on publishing? When can we expect issue #2 to be released?

Jesse: That really depends. I’ve paid the artists for most of the first issue but it all comes down to if I get my Kickstarter backed. I love making comics but I’ve been unemployed for five months so I really can’t afford to make them on my own anymore. People that have read my comics seem to really like them so I hope word spreads and enough people pre-order the comics through Kickstarter. If that goes well, then the second issue should be out in August.

Madman: Who would you say have been your major influences to you as a writer?

Jesse: Honestly, bad horror movies. I had an uncle that would let me watch whatever I wanted when I visited him. Most of the time we watched movies produced by Full Moon Entertainment. They made some amazing flicks. I would seriously watch three of them a night.
I think Peter Laird and Kevin Eastman have influenced my life more than anyone else. They have done what I want to do. Created a unique story that stands out from the norm and not compromising their vision while doing so.

Madman: Even though Johnny has his fair share of issues and seems like a real dirt-bag, I can’t help but want to read more about him. Will Johnny regain a sense of who he was or will he turn down a much darker road then he’s already traveling?

Jesse: Johnny has his demons, that’s for sure. He’s battling these monsters the best he can. Sometimes he wins and other times he falls into the darkness.

Madman: I can’t help but notice that almost every page of your books are filled with controversial subject matter (i.e. a murderous super in Patriot, a PTS vet with a meth addiction, sex bots and political rights in Chapel). What new edgy material can we expect from you and Bleeding Ink?

Jesse: I have over a dozen comic book scripts I would like to produce. I’ll get to each of then one day, but right now, I am just working on promoting what I have and building a fan base. I’m working with a great artist right now that might do the comic and get paid back end. I hate having to do it this way, but I have so many stories I want to produce.

Madman: What comic book titles do you personally follow?

Jesse: Right now, none. I’m unemployed. Any extra coin I have is spent on getting my own comics made.

Madman: I really enjoyed David Brame’s and Heather Breckel’s work on the first issue of War Zone. Will they be back in later issues or do you have different artists coming in?

Jesse: They will be back for the other two issues. Even if I have to sell blood to pay them. Their work is amazing and they deserve all the credit for making War Zone look great.

Madman: If you were given three wishes what would those wishes be?

Jesse: 1) I just want to keep doing what I am doing and to be able to make little coin doing it. I am not materialistic. I just want to keep funding other projects. Making comics is a sick addiction for me. 2) World peace. 3) That creative businesses were really based on creativity, not money and nepotism.

Madman: I’ve seen a bit about a non-comic related novel you’re working on. Can you talk a little about that? I was on the road for about eight years through most of my twenties, traveling with various carnivals; it was a very Kerouac type of experience. A journey very few people understand in this modern age. I would enjoy hearing about your book.

Jesse: Sure. Back in December, I went on a two month road trip and wrote the first draft of my novel. Gold-Lined Storms. The story is about Joshua Blackwood, a guy that finds out he has schizophrenia so he goes on a road trip to find himself before his condition starts to take away the person he is. As the book progresses the writing style changes as his condition becomes worse. I am a very method writer, so I stayed in character most of the time. The book turned out really well and I am just working on my second draft now.
By the way, did you know Kerouac was schizophrenic?
Still working on the web site but it’s looking really good. www.bleedinginkproductions.com
I also have a Kickstarter going for War Zone if anyone wants to check it out and support my twisted stories.
http://www.kickstarter.com/projects/121299846/war-zone

So there you go people. It is now your civic duty to hand this cool cat hands full of cash so that he can continue to produce the finest of independent comics that comicdom has to offer. Next time you’re on Facebook, stop by the Bleeding Ink Comics page and tell Jesse that the HCB sent you and maybe he’ll keep the free comics headed our way and maybe just maybe when he hits the big time he’ll blast Scott Snyder in the nose for me. Yeah, I bet he would. Thanks again to Jesse Grillo for taking time to answer our questions and for the free comics

Posted by The Hammond Comics Blog at 3:42 PM