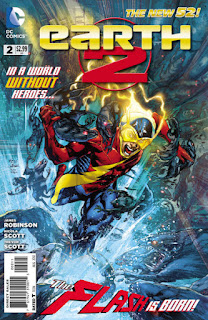 As much as I love the Golden Age of comic books and the heroes they wrought, I'm gonna have to file this one in my 55-gallon drum of don't give a shit.

I'd heard that DC's newest cash- in was a big reveal that outed an established character as being gay. Okay, that's fine. Nothing against gay people, much less gay comic book characters. Hell, I love Northstar, even before Marvel outed him. After catching wind of this bit of maneuvering (manurevering?) and reading through some forums, I thought, "holy crap, if they make Superman's Pal, Jimmy Olsen gay, that would be a masterstroke! Genius, even!"

As touted by Dan Didio, he would be an established character, firmly entrenched in the DC lore and universe, and would present a multitude of storytelling opportunities!

Nope. Instead we get Alan Scott. Granted, we were not lied to. DC did out a famous, elder statesman of the continuity. They did pick a character that was part of the DCU for decades, yet still managed to suck out by choosing someone that is obscure enough to modern readers as to not alienate anyone.
Wow. Way to pave the road, DC.

I felt like they had more impact utilizing Scandal Savage (from the dear, departed Secret Six) as a gay figure than this shameless attempt to be hip and topical.

Not only is this a retcon wrought by the mostly dreaded New 52, the story takes place on an alternate earth as opposed to the primary earth in DC's current continuity. Or Earth 1...or Earth Prime...or whatever the hell DC quantifies as their primary world for storytelling purposes these days.

Honestly, I'm only paying cursory attention to the Post-Flashpoint DCU anyway, because they're bound to have another Crisis here in a year or two and reboot the entire line anyway.Hopefully Grant Morrison will write the next one, and it'll be as slapdash and incomprehensible as Final Crisis.

Aaaaaanyway, as far as the ACTUAL book in question goes, it wasn't that bad (ain't I a stinker?). I'd picked up the first issue of this book, pre knowledge of an issue 2 gay reveal, and enjoyed it. As much as I hate on DC, I'd always loved their alternate earths, Elseworlds, and other parallel worlds (Gotham by Gaslight?, Superman: Red Son?,JLA: Earth 2? Superman: Speeding Bullets? Bitches, please...), so when hearing they were throwing another title involving an alternate Earth at us I figured I'd give it a shot. I figured as bad as it might be, it'd be better than the inevitable Batman/Grifter team up that will make me stab myself in the cerebral cortex with a tightly rolled back issue of Wildc.a.t.s.
Or however the hell one spelled that dreck.

This issue of Earth 2 deals with Mister Terrific arriving on Earth 2, which is apparently related to something that happened in his solo book.
His cancelled solo book...
I had no basis for comparison here, because I didn't buy Mr. Terrific. Mostly because the characters name is Mr. Terrific.
Upon further examination, I discovered that we have not one but two Mr. Terrifics (Misters Terrific?), and they get into a bit of a tussle.
Terrific.

Next we find a young Jay Garrick who is investigating a shooting star that landed in a field. In the stars crater he discovers the god Mercury, last of the gods, who is dying. You guys see where this is going?
So, Mercury warns young Jay Garrick about an incoming evil more dangerous than Apokolips (Earth 2 had recently fought off an Apokoliptan invasion, as revealed in issue 1), and then dies.

But not before imbuing young Jay with the speed of a god!
70 year old spoiler alert: Jay Garrick is the original Flash.
Finally, we are treated the big Alan Scott chapter where we find Scott arriving in Hong Kong on business. He meets up with his special man-friend and they share a smooch, then talk about staying at a hotel. No big controversial move, no gasps from the audience, just two people in love. The only thing that irked me about this was the fact that Alan Scott is a great, square jawed bear of a man, and his boyfriend is a lithe, wiry, sort of femme-like gay stereotype. Check out the first panel he's in. You'll know.

We jump back to The Flash after this, where we find him running fast and rescuing a young couple from a swarm of rat creatures left over from the Apokolips invasion.
Rats. From Apokolips. Called...wait for it...
Apokorats.

Okay, now this book was starting to wear on me a bit.
Flash then runs across the ocean in an effort to test his newfound powers, only to end up in Poland and confronted by a figure that seems to be Hawkgirl or Hawkwoman.

The book closes with Alan Scott on a train, proposing to his boyfriend. The train suddenly explodes, and a slight green light can be seen from one of the trains windows.
70 year old spoiler alert: Alan Scott is the original Green Lantern.

This certainly wasn't the worst book I'd purchased last week. That dubious honor undoubtedly lies with some Marvel comic (sorry, House of Ideas, but you've been lacking lately), but it was nowhere near the best purchase of the week either.

Posted by The Hammond Comics Blog at 5:44 PM