As I sat on Sunday in my apartment recovering from a great weekend, many hours were spent racking my brain about what to write about this week. Having a site that reviews comics is a fun and positive thing, but at the end of the day we are fans with opinions and limited bankrolls. I read a lot of the same books from the same writers this week, and I thought that the last thing this website needed was another review of work by Johns, Snyder, or Ennis, the only books that were on my pull list. One part about this whole process that is difficult, is the lack of resources that I have available to purchase new and different books. A part of me wanted to do a piece about why I like comics, an overview of why I love a medium of entertainment that is met with much scorn by the majority of Americans. This may be coming in the future, but at this particular moment there just isn't enough time to do it right. During my daily commute to Chicago it dawned on me that this is our website, that Cody and I can write whatever we want, and a fairly large part of my weekend revolved around something much different than comics. It revolved around an almost equally misunderstood past time, the world of fantasy football; particularly one trade, and more specifically a controversial trade veto that probably cost me a victory this week. So there is your spoiler alert, this week my post has nothing to do with comics at all. Caveat Emptor. Since a lot of comic fans are into gaming, I would like to share my first experience with America's hottest new hobby. 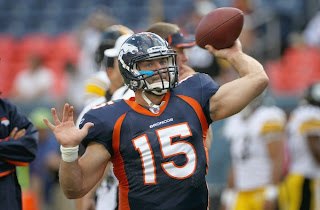 Tim Tebow is one of the most controversial quarterbacks in the NFL, and much of this controversy surrounding the young Heisman winner from Florida stems from his religious beliefs. Tebow is an Evangelical Christian, a sect of the Christian faith whose members have the obligation of spreading Christianity, a responsibility that can be viewed by the non-religious or non-Christian with emotions ranging anywhere from annoying to offensive. He was a star of a much discussed Super Bowl commercial advocating his Pro-Life beliefs. A defensive player of the Denver Broncos famously told him to "go fuck himself" after he asked to lead the team in prayer, and he has publicly stated that he is going to remain celibate until marriage. In a society that seems to become more agnostic and atheist every single year, these are controversial views, especially for a figure in the spotlight. But regardless of his faith, he has done amazing things on the field that no one can dispute.

In college he led Florida to two National Championships and won the Heisman his sophomore year. No one can argue that these are College Hall of Fame statistics, and many of these games were won in dramatic fashion by a player that loved to win, and he in turn inspired his fans by consistently winning. There is no doubt, Tim Tebow found ways to win and won football games. Big games. But regardless of his proven track record, the majority of NFL fans believe that Tim Tebow will never be a great quarterback in the NFL. There are also a minority of fans that believe Tebow is a great quarterback, and that his determination, track record, and work ethic will eventually propel him into the elite quarterback conversation. I am one of those people. I am not pro-life, sure as hell not celibate, but my difference in beliefs from Tebow does not change the fact that I think he is simply a great football player. And I also believe that he will find a way to win in the NFL despite the consistent doubt by almost everyone ranging from the majority of NFL fans to the majority of NFL commentators. At the end of the day, I believe in Tim Tebow.

The last two years I lived in South Korea and worked as an English teacher. The experience changed my life profoundly, but there were drawbacks including the time difference. South Korea is 14 hours in the future from America. This means that most sporting events need to be recorded in advance or not watched at all. Barely any comics either, you can buy trades in Seoul that are marked up. When I returned home and was invited to join a Fantasy Football league, I accepted the invitation with enthusiasm. There was a $20 fee, but a chance to win some money so I decided to do some research. Through sports radio and internet news articles I developed a strategy. Michael Vick came up a lot, and one particular article convinced me that if I drafted him and he played exactly like he did last year I could win the league championship in almost one move. There were risks involved. Vick is injury prone, and we all know about his stint in federal prison for dog fighting. Forgiveness is a virtue, and Vick won over the hearts of many fans and his organization through his inspired play in his first year as an Eagle. Not me specifically, but this was my pick and I drafted him anyway despite my issues with his character. 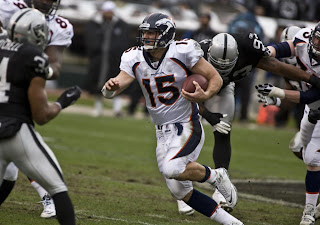 The draft came and went. My team was not horrible and not great. Also, I am extremely busy so I dropped one game because I forgot to add a couple players and lost a lot of points due to my own neglect. Two other games were lost due to Vick leaving the game injured. This next game was a must win for my team and my season. Both Eli Manning and Vick were on a bye this week. ESPN was abuzz with Tim Tebow's starting status and I wanted him for my team. The manager of his team did not initially want to trade Tebow. After four rejected trade proposals I suggested a trade of Vick for Tebow straight up. I needed this game, my quarterbacks were on a bye, and Manning and Vick had almost identical statistics. The price was a little steep, but I drank the Tim Tebow Kool-Aid months ago so I decided that my season would rest on his shoulders.

Then the emails started. The majority of people in my league were irate about the proposal. I was even accused of trying to "blow up" the league with the trade, and these were guys that I have known for years that were now suddenly questioning my integrity over Fantasy Football.

I stated my case for Tebow logically and passionately. This was my team anyway. There were people arguing both sides. Their arguments started to become heated and escalated. The message boards were littered with insults, personal shit too. The trade was voted down by the majority of the league. And when I realized Sunday that Tebow had the fourth most points of any quarterback, that with him on my team I was three points away from my opponent who had no Monday night games and I had Maurice Jones-Drew playing on Monday night, I became angry as well. The selfishness and arrogance of the majority of my league probably cost me the game this week. I started this whole endeavor to have fun with my friends, and this "fun" spiraled into mudslinging and insults over almost nothing. Now I have two more months of Fantasy Football left. There is no way I can win at 2-5. Almost all of people that "vetoed" my trade would have lost in points to me this week if I had Tebow on my team. I was right in the end (at least this week anyway), but now it was too late.

The lessons and impressions that I take from my first Fantasy Football experience are that people can and do get emotional about this game. It is just as much about winning money as it is about fun sometimes, and I was screwed out of my money by the money driven managers in my league. Fantasy Football has more mainstream acceptance than comics or gaming, but it is strikingly similar to gaming in every way, the subject is simply different. The all around shadiness and negativity surrounding the Tim Tebow debacle has left me with a bad taste in my mouth regarding playing Fantasy Football in the future. While I am writing this post, I just received an email that if the trade was proposed now it would not be vetoed by the league. Thanks assholes, one week too late guys.

Finally, Tim Tebow remains one of the most controversial figures in NFL history both on and off the field. This will not be the last conversation about the work in progress up in Denver. The Broncos will probably play better teams, Tebow will have growing pains and bad games, and he will probably lead his team to victory again like he did last week in Miami. But to paraphrase and distort the famous words of Dennis Green, the Bears were not who we thought they were when it comes to Tim Tebow. The man who has always found a way to win led the Broncos to a stunning overtime victory against the Dolphins last week, and I have a feeling that this will not be the last overtime victory in Tebow's soon to be storied career.

By: William R. Davis Jr.
Posted by The Hammond Comics Blog at 6:15 PM