Laying Eggs: A Glimpse into Hawkeye


I think the life of Hawkeye suits him better as Nick Fury’s lackey, versus being a member of the Avengers. Hawkeye’s new threads are so much better than his old purple costume with that dumbass pointy mask deal. I really hated the way these jack-wagons drew the Hulk. He shouldn’t be bald! He shouldn’t be gray! He is the Hulk!!! He should ALWAYS be green. The Hulk being anything other than green is like Superman without the “S,” Wolverine without the claws, and the Silver Surfer without the damn surfboard. Green or die. Green or die. 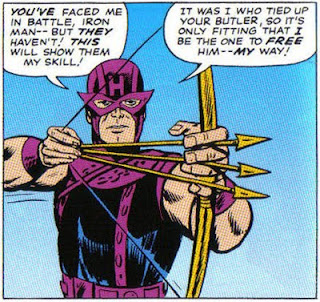 The art was drab and dreary, but it made the freak with the glowing skull stand out as he man-handled the pathetic gray excuse for the Hulk. But don’t worry. The Incredible Hulk #1 is out this month. In all it’s “greenness” I might add. I think I’ll pass on this book in the future. I like the new Hawkeye character, but not enough to really care.


By: Cody Miller
Posted by The Hammond Comics Blog at 1:49 PM