Jennifer Blood: A little Ennis in us is Never a Bad Thing

Garth Ennis has created some great books over the years. I have to rank The Boys and Preacher as two of my favorites. Preacher was a pioneer in adult themed comics, and there were things within those pages that were beyond shocking for the time period. Later, The Boys and Chronicles of Wormwood raised the bar again, and despite the obligatory blood and gore found in almost every Ennis book, Chronicles of Wormwood dealt with subject matter that can be deemed by the average reader as blasphemous or deliciously irreverent dependent on your religious leanings. Ennis portrayed Jesus as a black man with dreads that was mentally challenged due to getting his brains bashed in during an LA race riot; the main character of the book is a likeable antichrist trying to postpone an impending apocalypse, you be the judge. As much as you may hate that depiction of Jesus, one must admit that the concept is extremely creative and inventive, and I'm Catholic (one that thinks God probably has a sense of humor). But that's just my opinion. 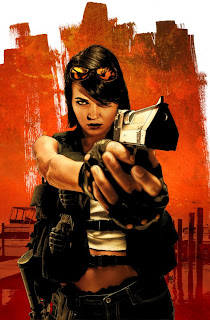 The Boys explores the theme of absolute power corrupting absolutely. And in the reality of this book, that is the case completely. The Boys are a government funded secret agency devoted to policing superheroes that are made and controlled by corporations, kill at will and without remorse, and publish comic books as propaganda intent on keeping "supes" in a positive light with the general public. It's one of my favorite books out there right now. When I heard that Ennis came out with Jennifer Blood, I had to see what it was all about.
Crossed set the bar for blood, gore, and general profanity in all forms, completely pushing the limits of what was deemed acceptable . I knew that there was no way Jennifer Blood could compete in any of those categories. But Jennifer Blood is Ennis in every way; a dark and twisted blood bath focusing on revenge and retribution, a tale of a woman focused on nothing more than killing her estranged family members one by one and making them pay for their crimes.

The book came out intermittently for awhile, after issue three there was quite a long delay. This was a bit rough considering it was the best one yet. Admittedly, the plot is a little contrived, sort of a darker version of True Lies meets The Long Kiss Goodnight. Issues four and five came out weeks within one another. Four was weak. Five was better. Five explored the back story of Jennifer Blood, gave the history of her (little less twisted than Preacher but similar) family. There are a few shocking panels artistically, Kewber Ball was probably flipping between anatomy books and pictures of roadkill in order to make everything seem as realistic as possible. And it worked. There is some graphic and shocking stuff in Jennifer Blood. The story is slow at times, but if you are an Ennis fan it is worth the cover price. Ennis is still setting the trend when it comes to breaking new ground concerning content in comics. Just when you think there is no place left to go, Jennifer Blood is tying some poor bastard's intestines to the bumper of a car and then driving off into the sunset. This book is not the best that Ennis has to offer, but it is still a fun read and one of less serious books he has out there right now, a bloody romp in the park and a total page turner (most of the time).


By: William R. Davis Jr.
Posted by The Hammond Comics Blog at 4:37 PM