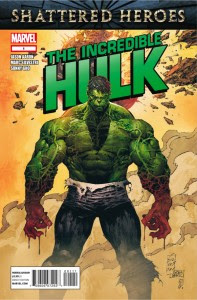 I freaking love this guy! I mean, what’s not to love about a gamma-powered rage monster? It’s been a long time since I’ve read an actual Hulk title. I have seen him misrepresented as a grey, bald, disappointment in Ultimate Hawk Eye. So when I saw Hulk standing defiantly on this great cover, I put the Flash that I was holding in my hand back, and forked over the $3.99 for this.

The artwork is amazing. Marc Silvestri should be knighted. Silvertri’s Hulk is how the Hulk should always be drawn; with a beard. Everyone knows a beard just ups your rankings on the bad-ass scale. Just ask Chuck Norris. Hulk with a beard > Chuck Norris.

We find Hulk living deep underground with a tribe of Martian midget looking things. They love him and the Hulk loves them; in a total non-creepy kind of way. The Hulk’s underworld bliss is shattered when the U.S. government comes to get the Hulks help in dealing with one Dr. Bruce Banner (that’s right, the Hulk and Banner are no longer one). Banner is now some kind of Dr. Monroe mad scientist. He is now creating half human/half animal, beings. His aim is to create another Hulk. For a character that has been adulterated as much as the Hulk has, writer Jason Aaron has breathed new life into a tired and worn out character. The mood and personality Aaron and Silvestri lend to the title promise to take this book boldly into the “don’t miss” category. It is now a new fixture on my pull list and as your attorney, I highly recommend you read this one. If you don’t, your balls will shrivel up and fall off. Really, they will. Don’t say I didn’t warn you flapjack!

By: Cody Miller
Posted by The Hammond Comics Blog at 2:40 PM