A Love Letter to The Unwritten 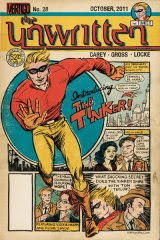 With all of this talk surrounding the "new 52" this last month, I thought I would take this opportunity to revisit an old favorite of mine, and one that should be yours as well. The Unwritten is the best book out right now. In terms of creativity and execution Carey and Gross stand above all other writers and artists. It consistently has the best covers and the best writing in the business. And in the land of adult themed comics, it doesn't get by on shock value as is the standard by most adult comic writers these days. The Unwritten explores the world of literature wrapped in a theme of shared consciousness that defines it’s reality. The Kantesque leanings themselves are great on their own, but when you get to read stories involving characters in classic literature, the possibilities and the amazing things that happen within the pages are endless.
Tom Taylor is a fun character as well. His pseudo celebrity persona is well written, and although the exact details behind his true identity have still yet to be revealed, the consistent jabs at the absurdity of obsessive Harry Potter fanboys are welcomed; I think it’s hilarious.
The current story arc is even more interesting because Mike Carey explores the world of comics as literature and tackles the issue of a woman's place in the publishing world at the turn of the 20th century, and Gross has been cranking out beautiful throwback golden age comic covers for the last two months. The last two issues honestly make me feel ashamed that they are bagged, boarded, and cataloged away anonymously in long white comic book boxes. They are in themselves, a form of high art, and I should probably frame them both in order to give them the respect that they truly deserve. The Unwritten is one of the best and most entertaining reads in any medium. I personally own every single issue (and multiples of some of my favorites). Go out and buy the trades. Do it. Worth every penny.


By: William R. Davis Jr.
Posted by The Hammond Comics Blog at 5:31 PM