A DC Fan's Lament: With Our Deepest Apologies

This was incredibly disappointing. I thought I had just picked up a copy of the new Green Arrow book. Instead, I grabbed this “Flashpoint” bull. I just don’t get it. Instead of the bad ass arrow flinger, I was given some Tony Stark weapon manufacturing rip-off. Let me look again. Yep, the cover says DC and right there on the cover is the green stud himself. Beyond that, it is a huge disappointment. Truthfully, I can only really blame myself. You see, I am not a real follower of DC. I think the last DC comic that I read was actually a Green Arrow book and that was almost ten years ago. Other than that, the only connection that I have with DC is that fact that one of my best buds, Saint Swantner, is a collector of all things Batman. I read his collection whenever I could. Truthfully, I like Batman. Always have. I still think to this day that the villains in the Batman books are the greatest evil-doers of all time. The Joker tops the list. I mean what’s not to like about a psychotic murderous clown? 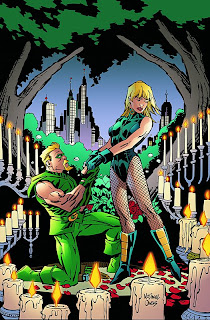 In all honesty though, I am a Marvel guy. Until this ridiculous “Spider Island” story line crawled out of the gutter, I thought I always would be. Heavy Rick D on the other hand is the DC aficionado. In one of our many conversations about Marvel vs. DC, he managed to convince me to “broaden my horizons” and “dip my big toe” into the world of Gothem and Metropolis. Enthusiastically, I jumped in head first. THIS is how I’m repaid; FLASHPOINT??? The good news is having been left with a lingering case of “green balls,” I dug out my old Green Arrow books and basked in their excellence. Maybe for a die-hard Green Arrow fan this book would make for an exciting and joyous read. For me? Not so much. Why didn’t anyone warn me about Flashpoint?

I knew right away when I mentioned to “his holiness” Rick D, that I had blindly picked up a copy of DC’s Resurrection Man to review, that I was on to something. I knew this because Rick D’s reply was, “Who the hell is Resurrection Man?” After only one book, I can now say, with a clear conscience, that this character has found a secure home at #2 on my all time favorites list (second to only spider man).

It was the bad ass cover that initially drew me in. I’ve been on this zombie kick as of late. It’s truthfully becoming some kind of obsession; so how could I resist the ragged man clawing his way out of his own grave surrounded by scattered skulls, femurs, and rib cages? I couldn’t.

This character is one of the most original and unique creations that I have ever been privileged enough to wrap my brain around. I don’t want to spoil this book for anyone, but at the same time I want to tell all. It’s like the secret you just have to tell someone…..everyone.

It works like this: First Mitch dies. Then a half an hour later he is resurrected with all new powers. That’s right. Every time he dies (he only dies once in this book, but what a gruesome death it is….he gets sucked into a jumbo jet engine) he comes back with a different and unique super power. Damn it man! Think of the limitless possibilities with an ever-changing character.

Mitch’s soul has a wanted sign stapled on his back. Both heaven and hell mean to claim it. It seems he has become quite the prize. But riddle me this true believers; how do you claim the soul of a man who can’t truly die? I don’t know, but I want to find out.

By: Cody Miller
Posted by The Hammond Comics Blog at 8:59 PM