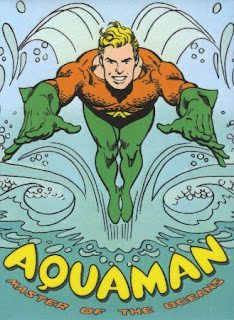 Despite it's cancellation as a regular monthly series over four years ago, there has been substantial buzz surrounding the release of Aquaman #1. This is mostly due to Geoff Johns taking up the mantle, but as a fan of Aquaman I would have read the title regardless of who wrote the script or did the illustrations. After finishing and rereading the book, I am relieved and excited. It was extremely well done on all fronts. My only issue with the book itself is that the title page would have made a way better cover, but you got a sweet title page so there's nothing to complain about there. The covers have not been that great on the new 52 with the exception of Swamp Thing. That has been disappointing.

There has consistently been a lot of criticism directed towards Aquaman in the past, and I have never understood this because in my opinion, the parallels between him and Thor are almost too numerous to mention. Thor is a successful book, why not Aquaman? And Aquaman had the advantage of being one of the most human superhero books around. The man created The Justice League, Aqualad died, and his death nearly caused Mera and Arhtur to divorce. What's not to love? You don't see that kind of stuff often in mainstream books. It took a mind like Geoff Johns to realize that there was a story to be told, and although it appears that the setting is going to change, it may be for the best. After all, the old Aquaman didn't have much mass appeal in the past, that could change for DC fans now that the series has been rebooted.

Johns humorously delves into his checkered past and lukewarm acceptance. Throughout the book, it becomes evident that barely anyone respects Aquaman. The police, the average American, and the criminal all view him as a second tier superhero. He is not even taken at his word by a "blogger" about the existence of Atlantis. The man won't even let him eat lunch in peace, he even has the nerve to ask: "How does it feel to be no one's favorite superhero?". Hilarious, pointed commentary and a good mix between fact and fiction.

A lot of number ones set up the story poorly, Aquaman #1 was not one of them. When reading Swamp Thing, I knew that the book was going to be good later, but besides some of the dialogue it was pretty uneventful. Johns did a great job of setting up an ongoing story arc while managing to keep things interesting at the same time. I even thought that Ivan Reis created some great stuff stylistically in terms of the art. Those creepy bottom dwelling fish at the end of the book looked like something straight out of a National Geographic documentary. Specifically, one of those shows about fish that live at the bottom of the ocean in areas so deep that they are not penetrated by light. I am ready for issue two, but hopefully the story itself doesn't become predictable and stays sharp. I will definitely be picking up every issue to see were Johns is going to take Aquaman in the future.

By: William R. Davis Jr.
Posted by The Hammond Comics Blog at 6:46 PM