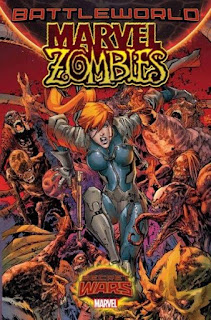 Oh boy, you guys, where to start?
Secret Wars is upon us, and dearly departed Marvel 616 rapidly becomes a distant memory. I'll not delve into the minutiae of Secret Wars, but between Beyonders destroying worlds, Namor and Thanos destroying other worlds, Dr. Doom remaking the world with godlike powers and Captain America tooling around with Devil Dinosaur, it's crazy. Whack, some might say.
I'd even go so far as to call it cray cray.

Dr. Dooms remanufactured world, (called Battleworld) is a composite of several chunks if alternate earths, making the backdrop for Secret Wars like a bunch of What If? back issues tossed into a cauldron and poured onto the page.

The setting for Marvel Zombies is a realm besieged by (surprise, surprise...) zombies and defended by heroes manning a Great Wall (zing!) called The Shield. Our protagonist comes to us in the form of Elsa Bloodstone and I'm pretty happy about that.

A little moment to rap about Elsa Bloodstone, if I may. Elsa is a rough and tumble monster hunter possessing a fragment of a meteor that grants her some degree of superpowers. She also has the distinction of being the daughter of Ulysses Bloodstone, monster hunter par excellence and bearer of the Bloodstone proper. The Bloodstone is a super-power grantin' meteorite that was encountered by a Hyborian barbarian who bombed around doing superhuman business for the next 10,000 years.
Because someone at Marvel was like, "Vandal Savage what?"

Anyhow, I love Ulysses Bloodstone despite the character being dead for longer than I've been alive and via the transitive property I also love his daughter Elsa.
Don't worry. It's a pure kind of love.
I enjoyed her miniseries, but the character really came into her own in Nextwave, a Warren Ellis series that arguably deconstructed the super hero archetype better than Watchmen.

This particular incarnation of Elsa finds her defending The Shield against endless hordes of zombies, and through zombie teleporting happenstance ends up stranded in the zombie-controlled wasteland beyond.
After disposing of a zombie Doctor Octopus she finds herself in the company of an amnesiac boy, dubbed 'Shuttup' by our erstwhile heroine, and attempting to safely make it back to The Shield.

'Shuttup' provides comedy relief, and the interplay between he and Elsa is entertaining, but I don't trust this kid. He suggests heading away from The Shield, toward parts unknown, instead of towards safety. Elsa eventually relents after seeing the horde of zombies barring their path. Kev Walker's art shines here. Elsa crests a ridge only to find the horizon and everything else in her field of vision a roiling swarm of undead. It's almost as great as his rendition of Zombie Juggernaut.
I'm just gonna let that image tumble around your grey matter for a bit.
Zombie. Juggernaut.

So, Elsa and her youthful charge head off into the post-apocalyptic zombie infested wasteland. It's no surprise that they're not alone, and I'm certain plenty of monster hunter-on-zombie action will ensue in the remainder if the series.

There are waaayyyy too many tie-in books to Secret Wars, and this dutiful Marvel Zombie is buying his share of obscurae for the event. I'm staying away from the Civil Wars and House of M and other well-known properties and picking up your basic Weirdworlds and your Where Monsters Dwell and what have you. Most of the good stories deal with minor characters from little, forgotten corners of the Marvel Universe and Marvel Zombies is no exception.

Spurrier crafts a witty character in Elsa and the PTSD flashbacks of the borderline abusive training at the hands of her father are chilling, yet darkly comedic.
How twisted is that? 1-10...
Kev Walker nails it in the art department with the assistance of Frank D'Armata on colors. Crisp, detailed figures and backgrounds coupled with colors that juggle dreary and bright from page to page really make the art in this book pop.

I'm not quite inundated with Secret Wars books yet, but the bucket it rapidly filling. After giving quite a few the first issue treatment I'm now at the point where I see who makes the cut. As weary as I am of the zombie pop-culture phenomena I'm keeping this particular zombie book on my pull list for the foreseeable future.

Marvel Zombie must buy product, after all.
Posted by The Hammond Comics Blog at 1:23 PM