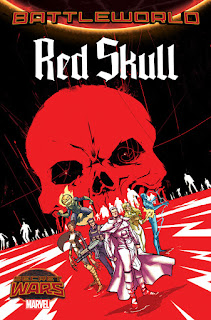 I decided way before Secret Wars: The Threequal started that I wasn’t going to make eye contact and maybe it’d just go away.

I passed on the two prior mega-events that Marvel shat out as well. I can’t even think what they were called off of the top of my head at the moment, that’s how much I actually cared. Marvel and DC are both suffering from diarrhea of the mega-event, saturation bombing their relevance right outta comicdom. Unless you’ve been living on some distant planet you have to know that Marvel has burnt their Multiverse to the ground and have launched all kinds of new series that I refuse to care about . . . I mean, chances are good that in about a year Marvel will just reset the MU back to how it was before Joe Q and the rest of the Marvel high ups started getting high and coming up with this “great idea” called Battleworld. I don’t like it. To be fair I haven’t read enough of the titles to say that they’re all horrible, not entertaining books and few that I have been reading such as Masters of Kung Fu, Old Man Logan, and 1872, and M.O.D.O.K: Assassins have all been entertaining reads. It’s the main title and its core tie-ins that give me the Mehs. It’s just seems like they (Marvel) just want to see what they can get away with. How long were the Marvel Executives sitting around the in the think tank in complete silence before some hero blurts out “Battleworld?” Even the name is generic and uninspired. I don’t like it.

So yeah, I ended up buying into this fiasco a little, albeit with titles that have little to do (so far) with the main event. There were two main reasons I opted to read Red Skull:


Reason #1 it’s only three issues
Reason #2 I don’t know much about Red Skull. To be honest I haven’t read that many Captain America books. In my youth I just always thought he was kind of lame so I never developed an interest in the character. My feeling has changed in that regard. The Cap movies and such, however true to the character or not, have piqued my interest. Now again, I’m not sure how true to the source the portrayal of Red Skull was either, but I really liked the Red Skull character represented in the movie. So here I am learning. Not that Battleworld is the best place to be trying to learn about Marvel history or anything . . .

I really enjoyed this first issue, but oddly enough it had little to do with Red Skull. Doom has tasked Crossbones to assemble a team to enter the Deadlands and either kill or find proof of Red Skulls death. It seems Red Skull is some kind of freedom fighter that is trying to knock Doom off of his high horse.

The team that he assembles is fun and interesting if only for a fleeting moment. Electro, Magneto, Jack O’ Lantern, Moonstone (I’ve no clue who this is), Lady Deathstrike, and the Winter Soldier himself are the starting lineup. By the end of the book as far as I can tell all of them are dead (eaten by the Marvel Zombies) except for one soul survivor. I’m not going to spoil it for anyone so you’ll just have to read the issue.

So far I’ve enjoyed the story quite a bit. It’s the art that hamstrings this title in my eyes. It comes off as rushed and incomplete. Foreground and background just seem to be muddled together in parts and in others the details just aren’t there. When they finally revealed Red Skull was a huge let down, he seemed too small and wiry for my tastes. I’ll be here for all three issues so I hope the artwork improves and the writing continues to not suck.
Posted by The Hammond Comics Blog at 1:30 PM