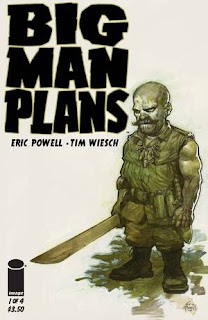 When it comes to miniseries I start more than I finish. There is a real talent in producing a quality miniseries, and many are not up for the task. Numerous series have a great start only to fizzle out halfway through and end up with a finale that has nothing to do with the beginning. It’s as I have stated before: a creator has a great idea for a scene or a character and that becomes the focus. They bend the story around it and they end up with a sub par product.

When Big Man Plans #1 looked at me from the shelf of my LBCS, I thought I would give it a chance. What a great decision! This was truly a good series to read. Four issues and not a bit wasted.

The story starts with the main character, a man who has dwarfism and only referred to as Big Man in an interior monologue.

“When you don’t care about losing your own life, when you lose the fear of losing everything, you can do anything. And the moment I read that letter, my number of fucks to give had reached zero.”

This really had my curiosity piqued as to the letters contents and who sent the letter. Big Man is setting in a bar dealing with drunkards poking fun at him and pretty harshly I may add. They get theirs; don’t worry. The entire story reminds me of a Charles Bronson Death Wish movie if Bronson was about three and a half feet high.

The story is well planned and executed. The first issue is a perfect set up with the story hook, background, and character designs. The pace of each issue is the same and the story develops naturally. I really want to share some of the highlights, but I am trying to support the sales of the story not hand it out.

Now I save the best for last: the artwork. Eric Powell’s pencils are phenomenal. Much of the story is focused on the situations occurring and his art reflects with little background and sharp contrasting lines for the characters. Colors are used perfectly to enhance emotion rather than the scenes. My favorite feature of his art is the exaggerated emotions on character faces. It adds intensity to the story that many others lack.

As the last issue came out two weeks ago, please pick this up in a trade or get the back issues. By the look of my LCBS they had issues left over, so you may be about to find them in dollar boxes. This series is really worth the read. You will truly enjoy it, although it is recommended for mature audiences.

Posted by The Hammond Comics Blog at 1:45 PM