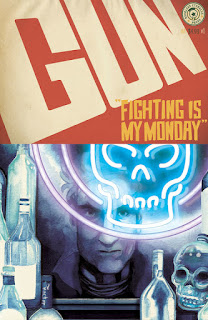 I wouldn't go so far as to say Kickstarter has completely revolutionized the world of independent comics, but it certainly changed its face. A creative team with a great pitch, a slick video and sound business plan usually has a good shot at getting their comic book made.

I've backed quite a few of these projects and have always been impressed with the results, but I missed out on Gun during its Kickstarter campaign. As fortune would have it, a friend of mine turned me onto the book. Writer/artist Jack Foster was a former co-worker of said friend, and I scouted out the book and ordered some copies.

BECAUSE YOU HAVE TO SUPPORT THE LITTLE GUY.

Gun tells the story of Mr. Twist, a minor league supervillain with vertigo-causing powers. Twist seems to have fallen on some hard times and has taken to attending villains anonymous meetings to make networking contacts, which played out like a weird melange of the support group scenes in Fight Club and an episode of Venture Bros.
Mr. Twist meets up with a few supervillain compatriots and the group runs across an unconscious superhero. The remainder of Gun plays out like a crime-action/caper grindhouse superhero movie gone awry as Mr. Twist and his fellow villains sell the superhero at a black market auction, run afoul of bounty hunting robots and spirit-possessed katana swords.

If that doesn't do it for ya, I dunno what will.

Despite being mildly played out on the Wanted/Suicide Squad/Thunderbolts theme of supervillains-as-protagonists, Gun is a fresh take on things by developing characters and a world that follow the tropes in superhero comics without making them seem like tired cliches.

The art in Gun is just as good as the script, kids. Jack Foster utilizes a fully hand painted method of illustration with a light, almost pastel color palette that reminded me of Ben Templesmiths work from the first 30 Days of Night miniseries. There were a few places where the art reminded me a bit of Richard Corbens work as well.
The only negative thing I have to say about Gun revolves around the art in the last few pages. It doesn't look as crisp or as well crafted as the rest of the book, almost as if Foster was pressed for time and had to rush it a bit. In the grand scheme of things this is a pretty minor inconvenience considering the script and art are tight throughout the remainder of Gun.

Buy this book, ladies and gentlemen. Copies are available for a modest price at www.guncomic.com and I urge you to avail yourself of a copy and request your local brick-and-mortar comic shop carry the book as well.

It isn't uncommon for comics coming off of a successful Kickstarter to get picked up by an established publishing company and get a wider audience and distribution. It'd do the world of comics a bit of good to have some Gun.
Posted by The Hammond Comics Blog at 1:49 PM