Madman at The Secret Stash 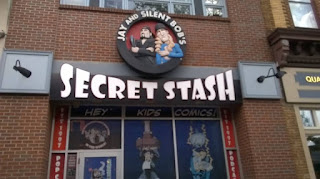 I first heard about Kevin Smith’s comic book store, Jay and Silent Bob’s Secret Stash, way back in my angst filled youth, in the late 90’s. At sixteen or seventeen New Jersey seemed like some far-off alien land that might as well be on the moon . . . but I wanted to go so, so bad. No question: a pilgrimage to Red Banks, New Jersey, was soundly on my top ten list of things to do before I died. In truth, my true motivation wasn’t necessarily to buy comics because for one I didn’t have any real cash at that age. You see, I saw the Stash as a sort of Mecca. It was a place where the fun was. I wanted to hang out in front with Jay and Silent Bob while listening to Brodie and Randal go off on a rant. What can I say? The world and my brain worked differently back then. 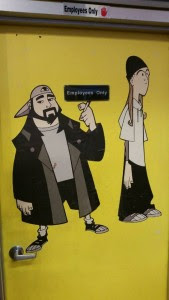 My friends and I drank the snoochie boochie kool-aid and in a big way. It was pretty much a weekly ritual to watch Clerks and Mallrats at least a few million times. We could and would recite the dialogue from Mallrats from beginning to end . . . verbatim. It’s crazy to look back and think about how something as ultimately trivial as a low budget movie could affect your life. I guess there are a lot of those types of things hidden deep down in the darkest depths of our humble beginnings. For us and our dark army Mallrats was a cornerstone that somehow justified our descent into geekdom . . . into counter culture . . . and we rallied around it. It’s like Brodie’s Grandmother used to say, “Why buy the cow, when you can get the sex for free?”

Fast forward eighteen years and there I was hauling ass on I-80, Northern Ohio a blur outside my window. I was embarking on an epic quest (vacation) to New York City to visit one of my favorite people on the planet and my oldest friend, Dustin Wayne Hunter. Dustin used to live right down the alley from me in a very small town in rural Indiana, and it was safe to say on any given day we’d be kickin’ it together. It worked out pretty well, he’d let me play with his He-Man and M.A.S.K toys, and I’d supply my GI Joes and my Battle Beasts. After high school “Life” happened, as it tends to do, Dustin, myself, and the rest of El Rancho’s Dark Army caught the current and dispersed to the four corners of the globe. Dustin joined the Air Force and was stationed in Europe for a good bit, and after reentering civilian life, he and his wife landed themselves in New York City. Hence me hauling ass down I-80 “faster than Walt Flanagan's dog” . . . towards NYC.

Fast forward four days and someday had finally come. This guy was headed to the Holy Land, but first I had to survive the chaotic New York/Jersey traffic and make it to Red Bank . . . "Small price to pay for the smiting of one's enemies." 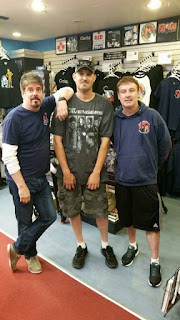 We pulled up outside, and it was a beautiful day. The sun was shining, birds were chirping, guys were passing out chocolate covered pretzels, there was hockey on the roof . . . okay, not really . . . I made that up. New Jersey doesn’t even have birds. We fed the parking meter and headed toward the door. I was a little surprised to find a very large, no-neck security guard (complete with Secret Service ear piece) standing watch outside and making everyone sign waivers in case you were caught on camera. My very first thoughts were that the store is a lot smaller then it seems on the Comic Book Men television show, and the Stash doesn’t have that comic book shop smell. ”I love the smell of commerce in the morning.” If you venture into such places you know exactly what I’m talking about . . . that musty, vintage, four color smell that every collector loves. I immediately grew skeptical, which lasted about half a second as shortly thereafter I geeked out like an idiot at a Justin Bieber concert. Jaws has just popped out of the water! I may need a moment . . . 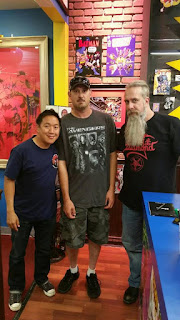 There was Mike Zapcic, Ming Chen, Walt Flanagan, and Steve-Dave himself, Bryan Johnson. There was also an army of television crew scurrying about doing their thing. It was pretty chaotic really. We browsed around for a good while just trying to blend in . . . yeah, not happening. 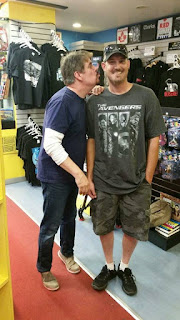 As far as comics go, I’m sorry to say I wasn’t that impressed. Of course they had the new releases, but they were lacking in back issues in my humble opinion. (This may be due to giving the camera dudes more room to maneuver but the back issues didn’t reach to “S”, so no Spiderman . . . sad face.) The six or so long boxes of back issues they had out were nothing that I personally wanted, not that I was in any condition to paw through long boxes. However, they had more trades and graphic novels than you could shake a dead cat at. I was perusing said trades when I glanced over and found myself staring Buddy Christ dead in the eyeholes. I don’t care who you are, that’ll put a smile on your face right there. There was also a 7-ft tall golden Mooby by the front door that I somehow missed on the way in. There was a menagerie of other art and goodies scattered about on the walls. They had a good-sized amount of legit action figures and other vintage treasures locked safely behind geek-proof glass, if you’re into that kind o’ thing. I recognized a few items in the cases that were literally “As seen on TV” featured on the TV show, such as vintage Batman nightlights. As was to be expected they had pretty much everything and anything related to Kevin Smith’s life’s work. The first pages of Bluntman & Chronic . . . there. Buddy Christ . . . there. Jay and Silent Bob’s blueprints from Mallrats . . . got them. We Assure You We’re Open sign . . . yep. Starry-eyed fanboy from Indiana . . . check. 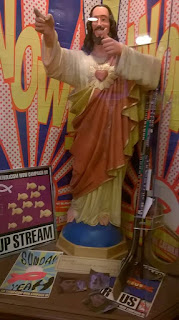 The TV people eventually kicked us to the curb so they could film one of those fancy transactions of cash and geek treasure, so we do what any normal person would do. We walked a couple of doors down to a sweet ass bar called Gotham to wait this TV nonsense out and have a few adult beverages. Gotham is what I’d expect from an establishment with such a name. They actually had a menu for original works of art, both geek related and not, that were up for sale. We sat right next to an abstract sculpture of Batgirl or Batwoman, one of the two, which according the menu cost a meager $96,000 . . . Pay ya Tuesday? 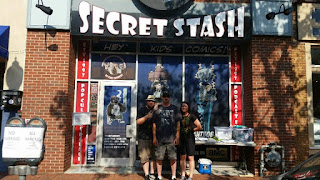 So yeah, that’s what we did. We ended up hanging out with the security guard while he waited for the all-clear though his fancy ear-thingy. He turned out to be a really cool guy. He bullshitted with us for a good while and even went out to the street to take a picture for us. Eventually we got the all-clear from Hollywood and went in again. The guys were nice enough to take a few pictures and acknowledge our existence. We took one more lap around the store and that was pretty much it. 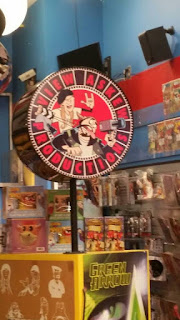 Dustin and I were truly kings amongst men. It’s not everyday that you get to cross off a bucket list item. The entire time we spent in the Stash looking around brought up fond memories of our youth. The Secret Stash was everything I had hoped it would be and spending the adventure with my oldest buddy and my wife made it all the better. A truly epic day and I have the Tee-shirt to prove it.
Posted by The Hammond Comics Blog at 2:00 PM