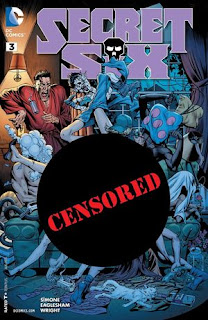 Recently DC and Marvel have been making poor decisions regarding their intellectual properties. I followed along cringing with the reboots, but I liked a few of the changes. The Big 2 are currently revamping and redesigning their stories, characters, and even the environment in which they exist. This is bad for us older comic fans for it means the death of the characters we have loved during our lives. Revamping means killing what the hero or story was and slapping the old label on something new. Marvel and DC are trading in their long term fanfare for a new younger generation.

My suggestion is to create new characters in the same flavor of the old ones and have them exist in their own element. The Multiverse. It was a great tool to enable creativity and expansion. If Marvel and DC really wanted to attract newer and younger readers, they should reduce the number of comic books focused on one story element to one or two QUALITY books and put the extra effort into a new segment of the multiverse which targets the desired demographic. Seriously, six or seven Avengers comic books revolving around the same event is really old and overkill.

As of two months ago, I have officially dropped all Marvel and DC books except for Amazing Spider-Man, Star Wars, Darth Vader, and Secret Six, and the latter is on the chopping block at the moment as well.

This release of Secret Six started in February of this year and has been slow coming out. Issue 2 came out in March, but this issue waited till June, and my LCBS owner, Shawn, told me that issue 4, due out in July, is expected to be seriously delayed. This story had my attention, but if the creators are not committed, then why should I be?

From the start Secret Six really caught my attention with its story hooks. This comic features six lowly villains who are kidnapped and placed into a coffin-shaped metal box in the ocean by a captor known only as Mockingbird. The cast members of the Secret Six are as follows:
1. Thomas Blake as Catman
2. Kani as Porcelain
3. Shauna Belzer as Ventriloquist with Ferdie, the dummy
4. Damon Wells as Big Shot
5. Mary as Strix
6. Lori Zechlin as Black Alice

The first two issues do a great job setting up the story and tying these individuals together. They are trying to find out who has kidnapped them and why. While trying to answer the question their captor posed another: “What is the Secret?” In issue three, the group has settled into Mr. Wells’ home while trying to stay low after their escape from the oceanic prison. This comic book is greatly entertaining. Each of these villains is trying to do right by being bad. Trust me. That statement will make complete sense if you read the issue.

The best feature of this series is the artwork. Issues one and two featured Ken Lashley, Drew Gerace, and Jason Wright working together and the images looked great aside from the depiction of Ventriloquist as undead in the rendering. Changing the artists may explain why there were three months between issues two and three. Issue three’s artwork was created by those credited at the start of this review, and they have done a superb job. Ventriloquist now looks just ugly rather than undead. Even the scenes look more crisp and gorgeous.

My favorite artwork is the cover. The cover really states a lot about the issue. We see Damon Wells looking at the scene on his couch, a jumble of bodies and random items with the center blotted out by a big black “Censored” circle. This scene is referenced in the issue and let us just say that Mr. Wells is definitely thinking about covering his couch in plastic. This act involved the absence of clothing, an electric mixer, a jar of pickles, roses, a dagger, a fish, and a jar of wax and caused the cat to hit a whiskey bottle labeled MrE. Yeah. That’s right.

Anyway, I would really like to see where this story goes, but I am not going to wait forever and a day to read them. This seems like the best thing I have seen from DC lately. Granted, I may be harboring ill feelings from the cancellation of The Movement, but that has nothing to do with the current DC debacle.

Posted by The Hammond Comics Blog at 11:22 AM