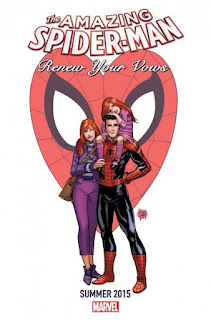 So, we here at the HCB decided to mix it up a bit and do some duel reviews team-up style with our main womans. Art Bee and his daughter did a review a few weeks back to kick off Estrogen Month here at the HCB. So . . . I had to think on what book to hand my wife to review. She never reads comics and has shown zero real interest in comics . . . ever, except maybe to tell me to get them off the coffee table. I was really surprised she actually agreed to this fiasco in the first place, so I had to tread carefully and try and not turn her off of comics for good. Thanks to this Secret Wars business that’s currently going on over at Marvel the answer just kind of fell into my lap with this new Renew Your Vows series.

In this Spiderverse Peter and MJ are married and has a daughter named Annie, which is cool. I’ve always liked the idea of Spider-Man having children. I really liked that about the Mayday Spider-Woman books, and I’m an instant fan of Annie here.

Every Spidey reader knows that part of the fluff that makes Spider-Man a great character is his inability to successfully balance his personal life and his web swinging gig. Having a child only helps to intensify Peter’s burden of keeping his two worlds worlds apart, which true to form never happens.

A being named Regent has turned the world on edge. Apparently he has the ability to absorb super powers and such. He’s killed off most of the heroes in New York, forcing Spidey to work overtime to pick up the slack. This causes MJ and the voices in his head to nag Peter into being Peter more and Spider-Man less, which is the whole undertone of the book.

With the lack of heroes on duty the inmates of Ryker’s supermax prison are on the loose. This means Venom is out and of course he heads straight to the Parker house forcing Spidey to battle it out with Venom in order to protect his daughter. Much to my surprise Peter takes the gloves off, offers no quarter and puts Venom down. Down as in kills him dead by bringing a burning building down on Venom’s head. Now Spider-Man killing anyone is just never done, but I must admit I loved it. It brings Peter down to the real world a bit more and gives this title a darker side that you just don’t normally see in a Spider-Man book. I must add it was the old school drooling “I’m going to eat your brains” Venom that I was weaned on and grew to love in my youth.

I’m excited to see where this book goes. The writing is really well done and art isn’t too shabby in its own right. I would highly recommend this book to any Spider-Man fan that’s looking for a different read that oozes entertainment.

My Initial Reaction: When being handed The Amazing Spider-Man: Renew Your Vows my first reaction was . . . what? What? The one time I get to interject my voice into this world of comic yin and yang, I get handed a mushy looking comic with a loving Spidey family centered in the middle of a gigantic red heart? Geez guys. How stereotypical to be asked to review a comic with such a girly cover. I expected to be handed a book with some sort of ninja sword wielding, venomous, laser eyed, telepathic man on the cover; of course with some sort of common name like Robert; Bob if he’s cool with you. However, with all predispositions set aside, I’ll turn the page.

Brief Summary: We start out with MJ, Annie, and Peter sitting around the kitchen table at home. MJ starts nagging Peter about all things Spider-Man. She pretty much asks him to agree to the good ol’ ball-in-chain relationship. As it turns out Peter has been spending extra time fightin’ crime, because a man by the name of “Augustus Roman” is snatching up super heroes and taking their powers. After learning this, a bunch of super heroes unite and decide they need to take Augustus, who later declares himself as “Regent", down. While Spidey is out with the newly developed super hero united group, Venom goes after MJ and Annie. Of course Spidey heads home and goes round and round with Venom until he crushes Venom and stands victorious. Meanwhile, Regent attends to his agenda and seeks to harvest all super powers. We are left wondering what is to become of our little Spidey world. An image of Regent on a billboard speaks to his current success in his mission . . . so far.

My Reaction After Reading the Book: I was entertained. I’m not gonna lie, I'd like to see what happens next. As I read I kept thinking of things that I’d tell the characters in the book as the scenarios played out.

Here’s what I’d have to tell them:

MJ: Seriously, why rep the nagging stereotypical girl? Your husband is Spider-Man; you should be equally as cool. You also need to quit complaining about Spidey making web fluid on the kitchen table. He has web fluid . . . that’s freaking awesome! The whole city is your jungle gym! Don’t hate, appreciate.

Annie: Guess what? Your dad is Spider-Man (yeah, I’d totally tell her).

Spidey: Let the only whip that is on your name be that of your web slinging type. You’re not a whipped kinda man, don’t let MJ control you.

Venom: Wipe your face. You drool a lot.

Regent: Everyone has had the dream of possessing every super power all at once. It’s a dream though, you know you’re gonna get blasted. Luck.

So yeah, that’s my Madwoman point of view on this book. I do think I might take a peek to see what happens in the next issue. Curious, you’ve got me curious, dear Watson.

Posted by The Hammond Comics Blog at 11:20 AM