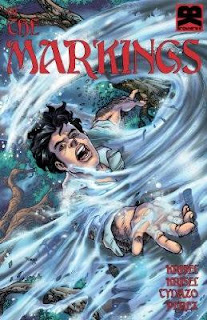 The Markings combines high action, history, and fantasy into two action packed debut issues. We all needed an Indiana Jones fix after the much-maligned Kingdom of the Crystal Skull ruined the franchise for an entire generation. Halfway through the first arc of The Markings I can safely say this new title is scratching that itch quite nicely.

Jack Lewis discovers a trend throughout history; mysterious tattoos that he believes are an ancient and forgotten written language consisting of runes. The problem is finding people who agree with his thesis. All detractors are soon disproven in a mix of high action and mystery. Sprinkle in some mysticism and you have one highly entertaining adventure story.

Issue one served as a solid set up, richly steeped in engaging historical background material. The wheels come off the wagon in issue two, giving us cover to cover action in an equally engaging and lavishly illustrated read.

The Markings 1 & 2 are well worth your time and money. Despite a few poorly placed speech bubbles they were both nearly flawless. There should be a forthcoming release collecting the first seven issues, until then make sure you support indie comics and give The Markings a well deserved place in your collection.
Posted by The Hammond Comics Blog at 10:41 AM