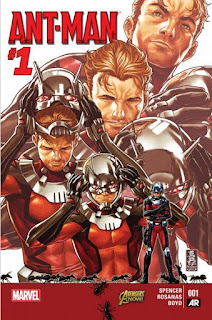 To be totally honest I really wasn’t expecting much out of this title. When dealing with a new release from Marvel, one should proceed with caution and keep your expectations low. I have read no more then ten comics in which Ant-Man may have been involved, so I am by no means any form of Ant-Man expert. Rick Harrison will not be calling me into the shop any time soon for my Ant-Man related wisdom. Nope. Not even a little bit. Morbid curiosity and the lack of Ant-Man in my life had me putting this book onto my pull list a few weeks back. The $5 price tag almost got it thrown back up on the shelf, but Mark Brooks’ cover sent it home with me. The cover is undeniably my favorite part of this entire fiasco. Well, that and the little ants crawling all over the place. Sadly the joy stops here.

The reading got really dry really fast. The book starts out with the current Ant-Man, Scott Lang, shrinking down and trying to hack into Tony Stark’s Iron Man helmet. Ok, I’m interested. All of the sudden I’m surrounded by pages of flashbacks . . . and this is pretty much where I lost interest and started to skim.

We are also blessed with ex-wife drama in the form of a parenting dispute between Lang and Wasp. This is where I started to skim faster.

I read enough to learn that Lang is hacking Iron Man’s helmet for some sort of job interview. I’m not a big Iron Man reader either so maybe I’m out of the loop here but I didn’t realize Tony Stark was such a huge asshole. If this comic did anything it made me hate Tony Stark, at least how Spencer portrays him.

The art was really blah as well. Some of the backgrounds were impressive but that was about it.

I’m sure that the Ant-Man movie coming out in the relatively near future was a major factor pushing Marvel to put out this book. If that really is the case then it was an even bigger failure, at least to me. Not that the previews for the movie look all that spectacular themselves. Maybe it’s just me but I can’t get excited for Ant-Man. Not even a little bit. Damn you, Marvel. Enjoy my $5. You win this round.

Posted by The Hammond Comics Blog at 10:42 AM