***WARNING: I am going against my normal policy of staying spoiler free. This is only to possibly save you the time and tears of even worrying about opening this comic. *** 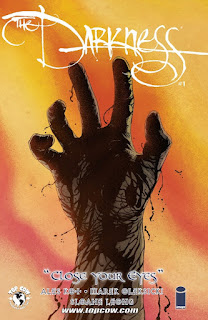 I have been a huge fan of The Darkness since Marc Silvestri created the series in 1996. Granted, the series has been stopped and started twice since its debut with several one-shots and mini-series, but the concept of the Darkness is still as powerful as ever. That statement is truly difficult to say with many writers and artists trying to mutilate a great concept. It almost seems as if the concept of the Darkness left its neighborhood of good writers and artists and ended up on the wrong side of town where it is laying in the fetal position while its face, kidneys, and arms are getting the shit kicked out of them.

With that said let me get to my mangled opinion of this one-shot comic from Top Cow.

Currently in The Darkness, Jackie Estacado is the bearer of the Darkness which he inherited from his father, who promptly expired at the instant of Jackie’s conception. The Darkness is a power that is handed down through the Estacado family typically from father to son and stays dormant in the new host for 21 years after birth.

“Close Your Eyes” deals with Jackie’s ancestor, Adelmo Estacado, in California, 1912. Adelmo works on an oil field, owned by Martin Cayce, to support his mother and bastard of a step-father. His mother was raped by his birth father, who brutally carved his name into her chest while raping her. To Adelmo’s mother’s justice, the man died right after raping her, having conceived Adelmo.

The story opens three days before Adelmo’s 21st birthday. He is in love with Emma Cayce, the boss’ daughter, and they have regular secret rendezvous to see each other and to plan their marriage. As the story goes, a dumbass smoking around natural gas ends Adelmo’s job. Adelmo beats his step father to death after finding his home ablaze with his mother inside. He and Emma have sex. Adelmo dies, and nine months later, Emma dies while giving birth to their son. The end. Nothing more to be said.

Many comic fans would agree with me when I say that the majority of Ales Kot’s work is fantastic. His writing for Suicide Squad was the key to the success of the series after DC’s New 52 reboot. While his writing for The Darkness: Close Your Eyes is good, there is a major problem with the story as a whole. There is no fucking point to this issue's existence! Now if this was going to be the first issue of a whole new volume about the Estacado family line, then I could understand and go along with it. This comic adds no value to any part of the story line as a one-shot. 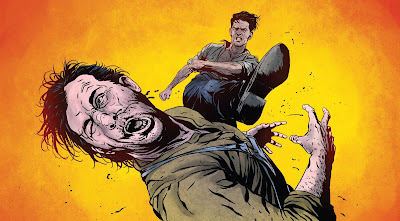 At quick glance several of the pages just look messy, at least that was my first impression while flipping through the book. The artwork and colors of this issue are really astounding once you get to looking at them. The detail Marek Oleksicki puts into just the faces of the characters is truly phenominal. Throughout the book, blood is mostly colored black. This effect did not settle well with me until my second read (which I do while writing a review), and then it really seemed to fit. The color scheme is mostly dark, as everything happens at night (though it does not) and the coloration of the blood is just a reflection of this.

To all my fellow The Darkness fans, leave this one on the shelf. If you are an Ales Kot fan, pick it up, read it, and bag it. If you are both, flip a coin if you don’t know what to do. As with the other previous pointless one-shot of The Darkness, I will add it to the long box containing my other The Darkness comics and kick myself for being so devoted. It is just terrible to see good work go into pointless endeavors.

Posted by The Hammond Comics Blog at 12:30 PM