Writer: Ales Kot
Artist: There are a lot of those guys
Review: William R. Davis Jr. 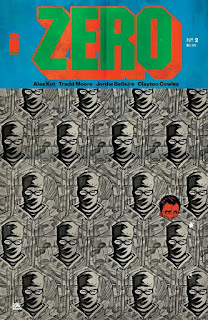 It has been a minute! I must say, it feels good to be writing for the HCB again. The guys have been doing some nice work in my absence, so make sure you check the archives because we have opinions that need reading by discerning fanboys and fanladies such as yourselves. On our way to becoming the most innovative comic review website in the business, we threw a lot of stuff at the proverbial wall. Some stuck. Some didn’t. This idea has turned into a tradition here among the site owners. If you’ve been reading, you might have noticed that the reviews are a little different lately.

For one month a year, we choose each other’s books. I literally drew names out of a hat in Busan, South Korea at my desk before classes started at my Technical High School. Art Bee and I were fated to cross swords this year (go homo), and he chose Ales Kot’s Zero for me to read. In its genesis, this was a way for Madman to get into some DC and for me to get into some Marvel. If I was going to give the old Mark Cuban speech I would be speaking on my deep seated Marvel prejudices that are inherent in the very fiber of my being. These days I don’t really read any superhero books. When they cancelled all of my favorites or watered them down to the point where they became unpalatable, the decision to cut the cord was really easy. All of that being said, I was glad that Art Bee chose an Image book for my yearly outside the box offering.

Even with the decline of The Walking Dead, Image has made some bold strides when it comes to editorial decision making. Image publishes the right books and will take chances on titles that may not be commercially successful. The best part is that some of them are, and when that happens, it completely changes the landscape of mainstream comics. There are a few odd books out, but it seems like these days everything worth reading is coming out of Image. If the sale of print comics continues to languish blame the Big Two, because at Image you’re at least getting your money’s worth.

Spy thriller books are normally not my bag, but when Art Bee assigned me Zero, I sat down and read all seven issues. By now you have probably noticed “There are a lot of those guys” under the artist’s credit. There is no other reason for this than there is one for every issue, and I read seven. That’s right, every single issue has a new artist making Zero quite a unique read. Issue three read like a one shot and it was a great book. While I appreciate the chutzpah it takes to release an ambitious title such as this one, the continuity in the major arcs was completely lost. Image is really swinging for the fences here, and while I won’t be continuing on through the rest of Zero, I could see why Art Bee has this title in his pull list.

If I were about 7 or 8 deep on monthly titles I would probably read this one too, but at the moment I am only into about five, and Zero missed the list. Not that it’s an uninteresting book by any stretch of the imagination; it was just outside my comfort zone. It’s not my genre, and I couldn’t get into the whole artist an issue gimmick going on in Zero. I almost felt like an old man shooing kids off of my lawn though while I wrote these words, and applaud the idea because Image actually made the decision to publish something so unique.

I’m not going to tell you to pass on Zero. If you want a spy thriller that is taking more chances than any other book out there artistically pick up this series. I can’t get books like Creepy where I live, but I read the shit out of that title and Eerie both whenever I can. Do they even publish those anymore? They were running quarterly last time I was in the States. Compilation books like the above mentioned horror titles and a little Dark Horse Presents aren’t off putting in the slightest to me. But if I’m going to read a title with arcs I’m going to need a little continuity in the art department consarn it! Now if you’ll excuse me I have to go eat peanuts, drink Old Style, and watch the Cubs lose at 2 pm on a Tuesday afternoon at the American Legion. It’s dark, slightly hot, smells like piss and stale cigarettes, and not a single woman has ever walked through the doors, not even for the pull tabs and/or bingo night.
Posted by The Hammond Comics Blog at 9:30 PM