Cody “Madman” Miller and I, Art Bee, went to our LCBS (Local Comic Book Store) for Free Comic Book Day together with some of our other friends. It looks like FCBD seems to grow every year, under the watchful eyes of Stormtroopers and Spider-Man. The following are our thoughts on some of the books we picked up at FCBD. 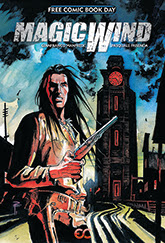 As soon as I saw the Indian on the cover, this book became my main target and my first choice for FCBD 2014. I had to work for it too as my LCBS was completely out by the time I navigated the long line that only “Free Comic Book Day” can bring.

Ever since the first time I watched the movie Young Guns, I’ve been a sucker for a good western story. Wild West stories rank right up there with pirate tales as far as my tastes are concerned.

This edition happens to be an excerpt from Magic Wind Volume 4, the beast which hits shelves sometime in July. I, however, will not be buying it. This book was a huge disappointment, the writing as well as the art. This one is a definite meh. 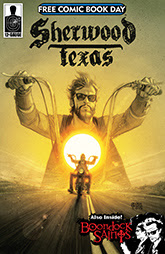 When I saw the preview list, this became my instant #2 selection. The cover just totally sold me. As the title suggests, it’s all about rough and tumble bikers. Within the first few pages, we have rival biker gangs. The Jesters and the Nobles, led by a guy named Queen ironically enough, duke it out over the grave site of Rob’s father. Rob is the main character in the book. Awesome scenario.

Rob turns out to be a Redman. Therefore, in the end, I got my Indian fix. I really enjoyed this title. The artwork was a masterful blend of rich pastels. I can see myself really getting into this title when the ongoing starts up later this summer.

At the very tale end, we are graced with the appearance of a preview of Troy Duffy and J.B. Love’s Boondock Saints. The preview was enough to guarantee that I will never buy this comic. Toby Cypress’ art looked like absolute crap. The story, however, is not much better. I’m staying well clear of these guys. 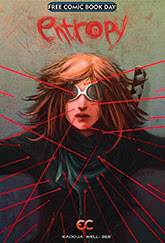 Just to get it out of the way now, Entropy is just an insult to comic books. It uses boring cliché after cliché throughout the story without really building any substance. I realize this is just a preview, but the writer could provide some depth in the characters or the story. So this book just told me the real thing is a complete waste.

The art work is devastating to the comic, even worse than the story. It is grotesque with accents of a Quentin Tarantino film effects and Beavis and Butthead looking characters. This sounds like an absurd description, but Madman was in total agreement with me when I showed him the book.

The two short stories at the end of the comic really salvage the use of ink and paper. The first of the two is called “Vegetable” and is created by Tihomir Hrlic. The artwork, though not great, is far better than Entropy. It is a simple little story with a nice twist ending. The other story is called “Crossed” and is written by Davor Radoja. The four pages of this story are fantastic, even though I feel as if I had heard the story before somewhere. Nenad Cviticanin uses sharp defined lines in the details of his artwork, which really adds flair to the story. 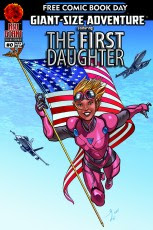 The First Daughter is a bright new concept in a super-hero mythos, and it has a lot going for it. Tasha Tasker is the daughter of the President of the United States and a protector of the world under the guidance of Nom, a gray little alien whom started the First Daughter project. The story is exciting and goes by just too fast. This is going to be a really neat story when it hits and will be a good read for children as well as older readers.

The artwork and colors are gorgeous. On the first page there is a front view of the White House with such detail that the sun is actually glaring off of the top of the building with photo quality. 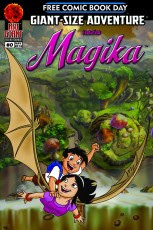 Magika is a tale of some kind of fantastic fairy land in which a boy, Niko, is learning the ropes. This is a cute story and right up a child's alley. The artwork is glowing throughout the segment of the book. It is very much equal to a Disney animation quality. I am sure I will not get this one later, but my child is definitely be interested. 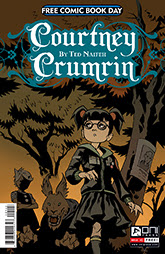 Oni Press has been really impressing me lately. They seem to put out good quality comic books. Courtney Crumrin is definitely on that list. This free comic is a reprint of one printed in 2012, and it is quite fascinating. The story is centered around a girl, Courtney Crumrin, whom is a bit of a loner and a witch, and she reluctantly ends up making friends with the new girl, Holly. As their friendship develops the situation starts to sour.

Ted Naifeh's artwork resembles something from Cartoon Network, but it is clean and fresh. The images are very good and consistent. The real advantage of his art is the backgrounds; they are very elaborate. I feel I may need to keep my eyes open for the trade collections, even though I am not big on witchcraft themes.
Free Book 4: Capcom 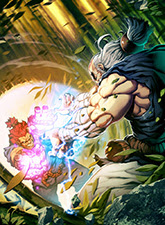 This will be short and to the point. This short story lacked a real story and was very predictable. The artwork was dull as well, featuring a lack of depth and awkward action.

My stomach could not handle it, so I did not finish this story. Enough said.

The story was not horrible, but it was not good either. At least the artwork was really good.

So lets face it, Street Fighter is a great video game and has been for a long time. As a story it is a bit lame. The characters speak then fight, fight and speak, fight and more fighting, and finally wonder when is the next fight. This is just too shallow of a concept to keep someone engaged in reading. I am certain there are video game nuts out there just frothing at the mouth for the next line of Street Fighter comics.
Posted by The Hammond Comics Blog at 3:00 PM