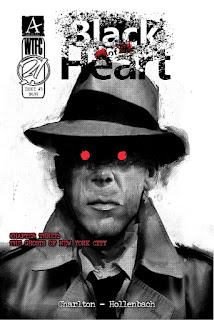 The week of June 20th Assailant Comics will be releasing the highly anticipated chapter three to the Black of Heart series. Black of Heart serves us a fantastic crime thriller with an extra scoop of thrill and a side of creepiness. Writer Chris Charlton has done a great job developing a dynamic protagonist in Detective Drake Harper while setting up a very engaging plot. To complete the picture, David Hollenbach’s dark, smoky style is a perfect fit to the tone of this freakish tale.

As a generalized overview of what has occurred thus far in the series, Det. Harper has been on the trail of a serial killer, called “the Vulture” by the media, who is dumping his mutilated victims all over New York City. On top of the pressure from the police department and the press about the case, he has several other dramatic events going on that are keeping him on edge, such as a bad tooth and bad wife. Fortunately, his drinking helps him cope with all of it, and few would think it wrong for Drake to be drinking in light of everything.

Up until Chapter 3: Ghosts of New York City, we follow the detective and the serial killer through their dance of cat and mouse, but at the end of Chapter 2: Eye of the Beholder, we are left with a major cliff hanger and the supposed identity of “the Vulture”.

It is going to prove very difficult to talk about Black of Heart #3 without providing spoilers, but I am committed to the task.

Chapter three opens with Drake overseeing the autopsy of the latest victim, and the most recent clues are recapped. Directly afterward, the police chief pressures Drake and his partner to work harder to apprehend “the Vulture”, and a new plot element is introduced. This element is centered on someone named Lucky Luciano, who is under investigation. From this point we ascend the story's spiral staircase until we reach the rooftop, where we find a huge cliffhanger. I really want to be a jerk about it and just tell you just to appease my excitement. Instead, I will be one with The Force and be patient.

As I stated at the beginning, David Hollenbach’s artistic style fits this story like a glove. Hollenbach’s artwork is not a pencil, ink, and color style as is found in most comics, instead he uses a unique technique that gives a shadowy, smoky look to the images. This effect truly enhances the story of Black of Heart by casting a gloom over the story. The only drawback to his style is low detail, which can make a few images hard to discern. Overall, the images are fantastic and powerful. 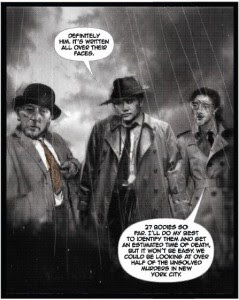 It is hard to find comics out that are void of clichés, pointless dialogue, and bad narration. So many mainstream writers seem to have a good idea for a dialogue or scene and look to squeeze it into their story. This is almost always a mistake. Even a great dialogue or scene needs to fit or it will lose its greatness. Fortunately, Charlton does not fall into these traps and is a true literary craftsman.

Black of Heart #3 has been long awaited by fans, and once read, the wait will resume. It is just as Tom Petty said, “waiting is the hardest part.” With the release of issue three the series is half over, so it is a good time to get on this bandwagon. If you are not reading Black of Heart, you should give it a try, especially since Assailant Comics will provide the first issue for free. I will freely admit I only started reading Black of Heart about a month ago, and it has my full attention.

Posted by The Hammond Comics Blog at 9:31 AM