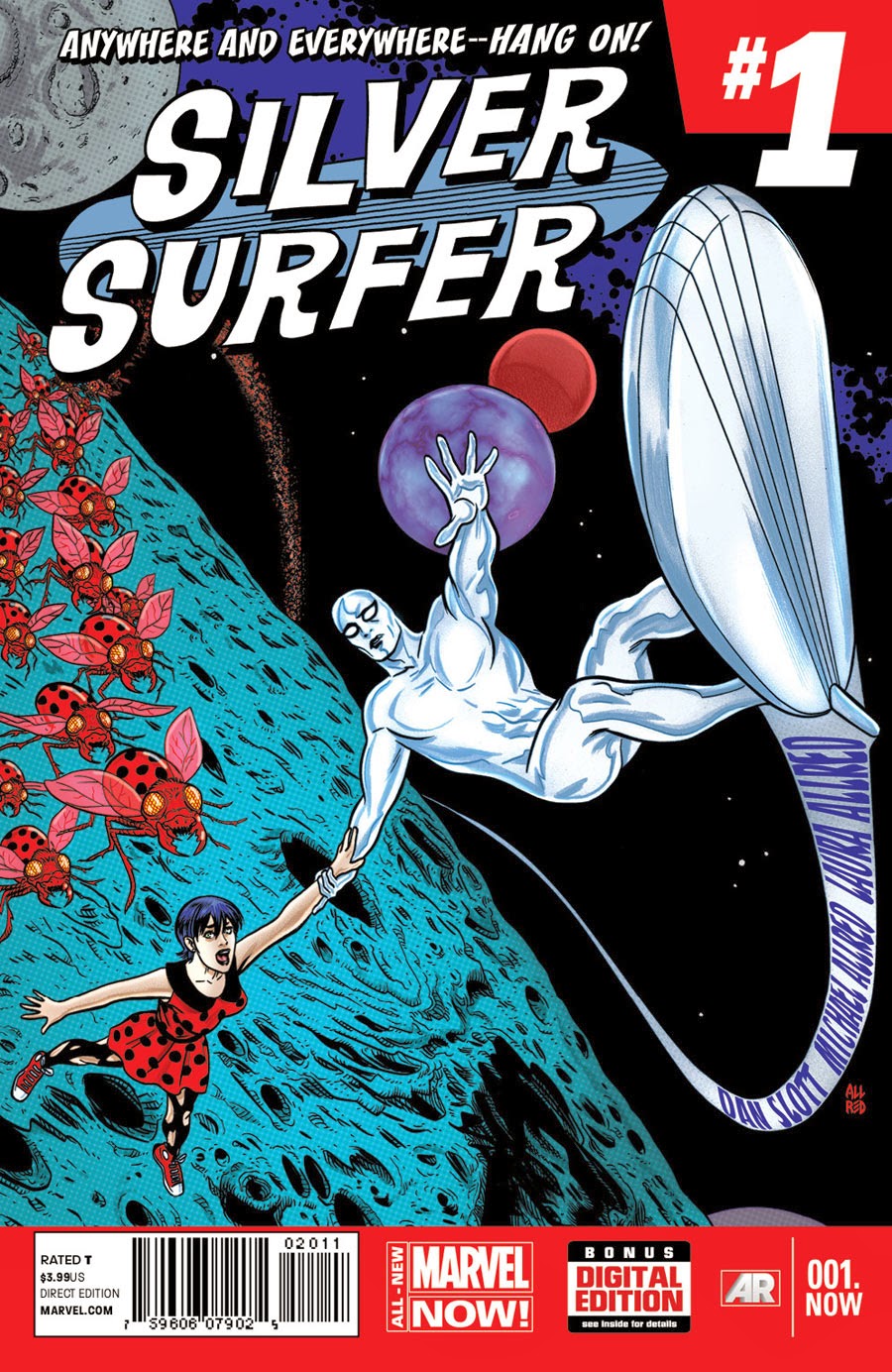 Silver Surfer is a pretty minor character in the Marvel Universe today, but he is without a doubt my favorite superhero of all time. People often ask me why. The reason lies more behind the mythology than the character. The introduction of Silver Surfer and Galactus completely changed the scope of modern comics. Fantastic Four #48 may be the most important comic ever released. The possibilities after this release were now endless, and it took the superhero genre into a completely new Universe metaphorically speaking (pun intended).

Galactus is an intergalactical devourer of worlds. To save his planet, Zenn-La, Norrin Radd, an astronomer agrees to become his herald. Upon meeting The Fantastic Four and changing his murdering ways, he is banished to Earth, but he still retains a large portion of his powers given to him by Galactus after his conversion. The silver surf board is a whimsical touch, and his saga is one of great longing, suffering, and sacrifice.


Regrettably, Dan Slott and I are not on good terms, and he has even blocked my own personal account on Twitter. I only regret this because he changed Spider-Man through his Superior run and made me actually read Spider-Man books. Spider-Man may be my least favorite character of all-time.

What I do not regret are my words. He bashed Kickstarter, and I will not tolerate any creator from the big two talking shit about creator owned comics, especially ones that are funded by the comic community instead of a traditional company. Kickstarter is a total game changer, and many great books have been published through the site that would have otherwise never existed. Shit, it saved Fantagraphics! I don't even want to live in a world that doesn't have The Comics Journal.

So hey, Dan, you're talented, but eat a dick. That being said, I thought he was the perfect writer to bring The Silver Surfer back to life when I heard the announcement. Putting a Doctor Octopus brain into a Peter Parker body and making Spider-Man an anti-hero in the process was a stroke of absolute genius.

I had nothing but nice things to say about Mike Allred. His art was/is rich, unique, and beautiful in every way. FF has been a staple in my pull list since he started drawing the Future Foundation. It is rare when every page of a comic is a work of art. He may be the best in the game right now. That is the greatest compliment I can give to an artist. His avaunt garde, pop art style fits perfectly with The Silver Surfer. Space is limitless and the possibilities are endless. I thought it was a good thing that Marvel chose the most unique artist in comics for a release of this weight.

(This review is not yet finished. Please temper your expectations.)

Now let's get into Silver Surfer, the reboot. While the first two pages feature some great use of literary device, the book completely fails on almost every other level. Never in my life have I criticized the work of Mike Allred, but the pencils are sloppy and uninspired. The grand reveal on page 12 looks like an Everlasting Gobstopper from OG Willy Wonka, with Norrin Radd underneath lacking any detail at all, the exact opposite of what Mike Allred art usually represents. What a disappointing first issue artistically. A little piece of me died after seeing the visuals in this one, a sad case of eye candy turning into arsenic laced eye NyQuil.

The writing is even more disappointing. I know what you're thinking: "Say it ain't, so?", but it truly is the worse than I ever could have possibly imagined. While I did not want a carbon copy of Stan Lee's Surfer, Dan Slott's rendition of The Silver Surfer lacks almost everything about the character that makes him iconic in the superhero genre. The back story was glossed over, which is fine, but the initial point of Silver Surfer becoming a herald for Galactus was to save his one true love and his entire planet. He is a character filled with yearning, who waxes philosophically about the cruel nature of the Universe after taking a large part in repeated mass genocide. His isolation, guilt, and endless search for meaning in the Universe are what make him appealing to lifelong fans and new readers alike.

Dan Slott has completely re-written history with this book, and in a terrible; almost sacrilegious, Before Watchmenlike way. The dialogue is shameful. There are one or two bright moments (sentences), but it is pointless and lacks any substance whatsoever. On top of this, he is saddling us with an almost Whovian earth woman that is completely out of place in the mythos, and she is crammed into the final page of an already life-shatteringly disappointing book. It reeks of laziness, not homage; an audible groan was had.

No doubt about it, this book fucking sucked on every level (I don't use that language in reviews very often anymore if that gives you an idea). Is Dan Slott the next victim of being anointed by Marvel as one of their flagship writers? I don't know, ask Brian Bendis. What I do know is that I might fly across the world, storm the Marvel office, and burn that motherfucker to the ground for their offenses to the medium both past and present.

No Superior Spider-Man can make up for the permanent damage you have done, Mr. Slott. Silver Surfer #1 is another shining example of everything that is wrong with Marvel today. After reading this book, you will want to Oedipus yourself if you are a lifelong fan. Reading this book did mild psychological damage to me, and may have possibly ruined one of my fondest childhood memories. If you ever unblock me from Twitter, know that I am blocking you immediately. Don't waste your money on this book. Buy something else.
Posted by The Hammond Comics Blog at 4:32 PM