REVIEW: Batman and Two-Face no. 28 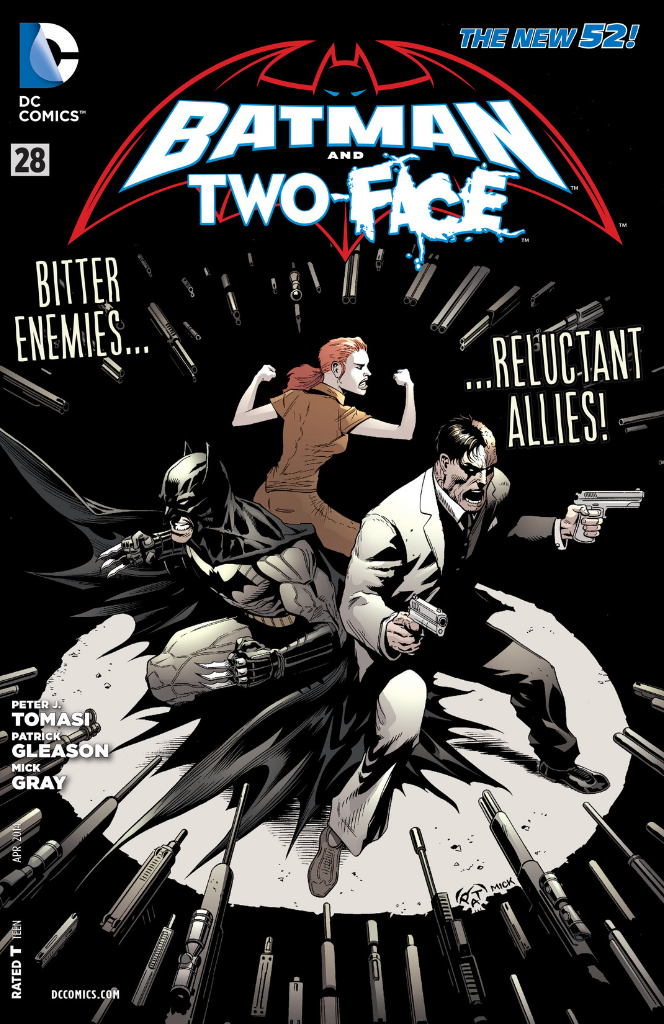 I stand by my statement that Batman is the love child of Bruce Lee and Sherlock Holmes. A man able to best any 6 opponents in simultaneous hand-to-hand combat and solve The Adventure of the Five Orange Pips before brunch. He's one if my favorite heroes for his mix of brain and brawn and DC is making it damn hard to like his comics lately.

Pretty well across the board, DCs Nu52 reboot has done nothing to inspire confidence in the brand. There's some decent books in the lot, don't misunderstand me. Swamp Thing is generally good, Suicide Squad still has the same chemistry it's always had, All-Star Western is great, and a handful of other titles walk the line between mediocre and periodically interesting.

When they aren't mired in horrid mega-events like Trinity of Sin or Forever Evil.

With great trepidation, I can't report any if those periodically interesting books feature Batman.
With the exception of Justice League.

I used to roll my eyes at a Grant Morrison Batman story, but in these grim days I yearn for the time when Wacky Grant was penning the Dark Knight.

Which is unfortunate, considering I (begrudgingly) enjoy his Vertigo book, The Wake. Pick it up, it's worth it.

But we're not talking about Lovecraftian merfolk taking over the surface world here.

We're talking about the Goddamn Batman.

Batman and Two-Face #28 is the conclusion of a multi-part story arc retelling, in true Nu52 fashion, the origin of Two-Face by stripping down the the pre-established canon to its core and leaving naught but the fact that Harvey was a lawyer as now he's a bad guy with a scarred mug and a coin.

Gone is the dramatic courtroom acid-bath. Gone is any Gilda Dent (spoiler alert: like so much Ma & Pa Kent she's already dead in the Nu52). Gone is...most of the interesting facets of the character, truth be told.

The issue picks up with Two-Face captured and about to be executed on live television, with Batman en-route to the rescue. Riding shotgun with The Batman is one of the Mckillen Sisters, a fiery redheaded set of twin Irish lasses who have been shoehorned into Batman and Two-Face's shared origin in a hackneyed attempt to rewrite comic history. The McKillen Sisters are Irish Mobsters, redheaded and hot-tempered as previously mentioned, and suren ye wouldnae be surprised tae find twa more stereotypical characters from Erin's Isle in all if comicdom, short of X-Men's Banshee from the 1960s.
Faith and Begorrah.

...okay, they don't actually talk like that but they may as well. They probably drink Bushmills and say up late singing Pogues songs and telling sad stories about The Troubles.

The sisters are also responsible for Gilda's death and Harvey's scarring and subsequent descent into villainy.
If anyone was curious...

A majority of the issue was composed of Batman and Two-Face fighting goons whilst pausing mid-combat for an obligatory, "Harvey, there's still good in you, I can feel it!", "No way, man! I'm totes evil!" exchange.

There are a few great spots in the book. Batman tosses Harvey his trademark coin after he'd lost it in a previous issue, Batman wielding a 'Liberty and Justice' courtroom seal like a shield, and Two-Face flipping the coin for Jim Gordon's fate only for it to land on edge in the mud. The resulting panels are great, illustrating the dichotomy and turmoil between Harvey's two sides.

The issue wraps up with a classic Batman/Gordon chummy rooftop 'fighting the good fight' routine, the remaining McKillan Sister giving a rousing speech in a prison yard that includes that old chestnut, "every man has two wolves fighting inside him yadda yadda".

I've not done the research to confirm the veracity of this proverb an an ancient Native American cliche, but regardless...

Hard to say, it was off-panel, but if he shows up as Three-Face next time we'll know what happened.

All in all, these new Batman stories are boiling with mediocrity. If Nu52 writers aren't deconstructing and rewriting origins, they're attempting to write the new, definitive epic story. It's an admirable goal, but the focus needs to be on good storytelling with the hopes that it incidentally becomes a classic. You can't set out to write the new Year One, or Longbow Hunters, Watchmen or Emerald Dawn. It has to happen naturally, organically.

I'm not going to stop reading Batman. Fans of M.A.S.H. didn't stop watching because of angsty, preachy Alan Alda directed episodes, so I'll stick it out, hoping that this stretch of Tepid Tales of the Caped Crusader will be over sooner than later.

Here's to hoping...
Posted by The Hammond Comics Blog at 6:47 PM