REVIEW: The Returning #1 and Monster & Madman #1


“The boundaries which divide Life from Death are at best shadowy and vague. Who shall say where the one ends, and where the other begins?” Edgar Allen Poe 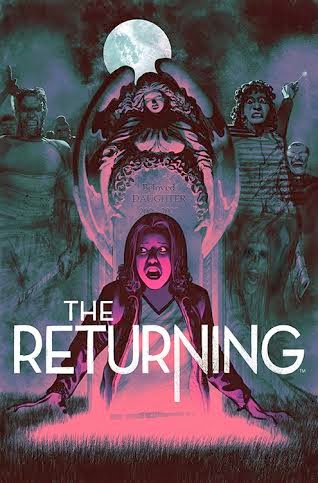 I have known for over a month The Returning was coming out, and I wanted to review it instantly. The cover on this book is so attractive and mysterious. For over a month I did not read the synopsis on Comixology, because I wanted the thrill of diving in with only the title and cover in my mind. My gut was not wrong on this one (for once). This was an amazing book.


The major theme of this book is fear, and it runs rampant throughout the story from the father, who is afraid to lose his daughter to the people afraid of “changers”,people with near death experiences. For the reader the suspense is incredible. Obviously Jason Starr has put forth the effort to plan out the story plot well, because the delivery of the first book of this four part mini-series is absolutely incredible.


The story is centered around Beth Turner, a regular teenager, whom has lost her mother tragically during a knife attack at the mall resulting in five dead. The person responsible for the attack was a woman, whom had a near death experience about a month prior. The changer had no idea why she had done the stabbing and was placed in a mental institution. The tragedy has left Beth's father in a very protective state.


People in Beth's world are coming out of near death experiences changed and acting bizarre or killing others, and this has lead to the development of a strong public prejudice to “changers”. Unfortunately Beth gets into a car accident on prom night and ends up in a coma after being clinically dead for five minutes. Once she wakes up from the coma in the hospital, we follow her and witness her experience the prejudice first hand.


I would really like to say more, but I do not want to deliver any spoilers. This is a strong start to what looks to be a great little tale. Starr has brought us a really unique story, and I am eager to read more.


Andrea Matti's artistic style is good. Her artwork shows Beth Turner is the focus of the story and truly projects Beth's emotions throughout the comic. My only reservation with saying all of this is that Matti does get sloppy in some of the panels, and Beth's plastic surgeon is working overtime on her lips. They keep getting thicker and thinner repeatedly during the comic. Also on page four Beth's father makes a spontaneous wardrobe change between panels. He goes from a checkered shirt to a plain one then back again without skipping a beat. Truly amazing (sarcastic)!


Major credit has to go to Frazer Irving for the cover of the comic. It is attractive and conveys the story. I admit it alone made me want to pick this book up, read it, and review it. That is why I made sure not to read anything about it prior to it coming out.


The Returning looks like it is going to be a great series that is full of suspense. Jump on board with me and lets see where Jason Starr takes us. 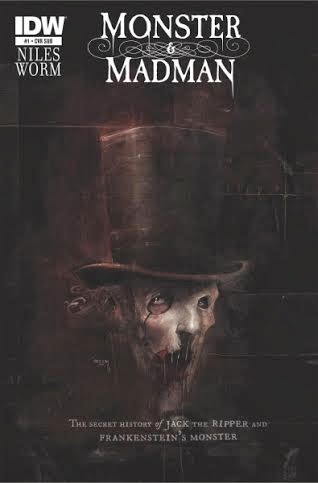 When I went to pick up my comics at my local comic store this week, Monster & Madman from IDW was looking at me from the top of the stack.  This was not on my pull list, but Shawn, the store owner, had put it in our folders for Madman and me to check out.  The cover promised creepiness with the subtitle: “the secret history of Jack the Ripper and Frankenstein's Monster”.  As a horror fan, the classic monster tales hold a special place in my heart.

Upon opening the comic, Frankenstein's Monster is shown walking in the snow, and Damien Worm has done a great job bringing it to life.  Unfortunately this is where I stop complementing Worm's artistic work.  On the next page, Frankenstein's Monster goes from wearing a white shirt to wearing a black one when he picks up a polar bear cub.  Consistency is something that is very important for the artwork of a comic book, otherwise the confusion detracts greatly from the story, making concentration on the title itself almost impossible.

The rest of the book's artwork had the feel of an old Nine Inch Nails music video, distorted and fuzzy.  Some of the panels look scribbled in frustration, and the use of shadow is completely abused to the point that therapy will be needed once the three issue mini-series is finished.

On top of the artwork being decrepit, the story is almost nonexistent.  Steve Niles provides us a narration with about as much depth as a sheet of paper.  As a writer, if you want to use an established character, you need to BUILD on the character and provide your own creativity to push the story.  In Monster & Madman, Niles is depending on the existing Frankenstein story knowledge to push his work forward.  Is it possible to fuck someone, whom has been dead for almost two centuries?  Niles has proven the answer to this question is: “Yes”.  I hope the ghost of Mary Shelley is following Steve Niles around trying to bag tag him constantly.

This first issue only includes Jack the Ripper at the very end of the comic, but I am left wondering whether or not Frankenstein's Monster and Jack the Ripper have any business in the same story.  This idea just screams high and drunk creativity at its worst.

I would like to wipe my ass with the pages of this comic book, but out of respect for Mary Shelley, it will be buried.  May she haunt these boys for their desecration of her art.

Posted by The Hammond Comics Blog at 6:47 PM