REVIEW: Seekers of the Weird #1 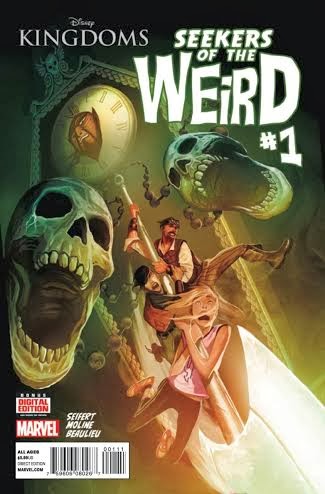 Seekers of the Weird #1 is a new comic from Marvel and Disney Kingdoms and is best described as a cross between the Twilight Zone and A Night at the Museum. Brandon Seifert has done a brilliant job of setting up the series. The story really flows well from the first page to the end with a decent blend of horror, action, and hijinks.

We meet the central characters of the book, Maxwell and Melody (Max and Mel for short). Mel is a jock, and her brother, Max, is a nerd.  They have an interesting relationship.  They finish each other's sentences more than once, and seem to have a closer connection to each other very much like a set of twins would have.  The kids live with their parents in their home above the family curio store: “Keep It Weird”.

Weird seems to be a running theme and not just a clever part of the title.  When Mel and Max are awoken in the middle of the night by a loud sound.  They rush down to the store to find their parents battling stuffed creatures that are spliced together from different animal parts.  The parents are fighting with an umbrella that shoots lightning bolts and an antique camera that blasts out energy.  The kids' parents, Arthur and Ellen, end up getting captured and pulled into the rainy sky.  Afterwards, the kids meet their Uncle Roland, whom introduces them into the weirder side of the family's home, the “Museum of the Weird”.

I am not into spoilers, so I will not give one.  As stated earlier, the story is really good but a little cheesy, which is not a horrible thing. Although this does carry the Disney name on it, I would not recommend it for young children. This does carry some images that would not be handled very well by them.

Karl Moline and Rick Magyar have done a spectacular job with the artwork in the comic. The colors are bright and balanced, and the consistency in the drawing is uncanny.  The details of the monsters and other oddities are just brilliant.  The two page pictorial of the entryway of the “Museum of the Weird”, which is hidden behind an awesome looking door in the parents' study, is just fanatic and very creative. The few action sequences are adequate.  They convey the idea but are not great on depicting the movements well. My favorite panel in the comic was the entrance of Roland.  The details of the skull and the weapons really bring this panel to life (as seen below). 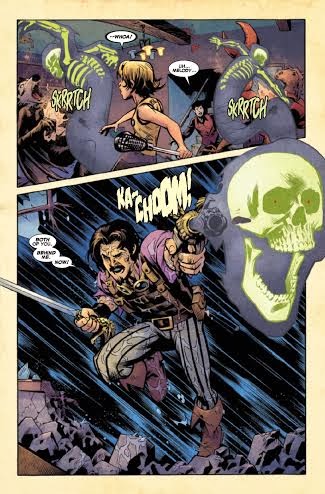 Overall, this was a good comic to pick up.  I will admit that my intention was to not like this book and thought it would be one to ridicule.  It is nice to be pleasantly surprised with a comic every once in awhile. Check this one out.  It has some potential.
Posted by The Hammond Comics Blog at 7:54 PM