Maybe it’s the fact that I’ve been trapped in my house under lockdown due to the arctic tundra that has become the outdoors here in Midwest ‘Merica.  Cabin fever is an all or nothing kinda deal.

Maybe it’s just that I’m sick of buying uninspiring comics that never bring anything new to the table.  There are a lot of these gimmicky unsubstantial books caught up in the avalanche of horse shit that conically spews from the Big 2.


I’ve abandoned a good sized list of titles that were previously cemented on my pull list.  It’s time to cut the dead weight and get back to the bare bones.  This is where I found Rex Zombie Killer, actually my local store promoted this local book (and still does) pretty heavily.  This current line of thinking has me digging and searching for the unknown, the local, and the original.

It all started with a Rex one shot that explains and builds up to the first issue of the current miniseries.  My first thought after having read said one shot was mostly positive.  My only real concern was that a zombie vs. animal comic with a teen rating, while entertaining, could never hold my interest.  Yeah, I was way wrong.  It is and it does.  Think “The Walking Dead” meets “Homeward Bound”………but with a gorilla wielding a baseball bat. Thanks to the convenient “story so far” breakdowns on the title page, it’s not necessary to read the one shot before jumping right into the newest misadventures of Rex and his pack.


As you may have guessed from reading the title, there are zombies involved here.  I know, I know, they’re everywhere and we’re beating a dead horse here, but truly it’s okay.  Even though there are zombies, called Rotters, shambling around craving brains, this zombie tale comes off immediately as fresh and original.  Granted, I had to stop myself from constantly trying to tie a personality from The Walking Dead characters to one of the animals.  That would be the first major deviation from the norm. 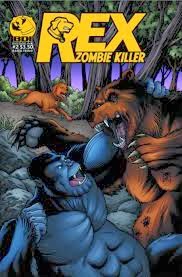 The protagonists are all animals fighting to survive the zombie apocalypse.  Rex, a highly intelligent golden retriever, is on a quest to San Francisco to find his human.  Through various series of events more animals including: Buttercup, a small corgi mix, Brutus, the tough guy pit bull, Snowball, the angry cat, and last but not least Kenji, the baseball wielding gorilla join in on the fun.  I have to admit Kenji really steals the show……..Daryl.

The greatest part of this comic is unarguably the army of squirrels running recon for Rex’s pack.  They steal the show along with the zombie griz, the pack faces off against in issue #2.

I recommend this series to anyone interested in a fun non-super hero read.  Rob Anderson’s writing is extremely entertaining and well done.  He keeps you wanting to read more.  There is a real family wholesome vibe this title gives off, which seems kind of strange to say about a zombie romp, but hey it’s true.
DaFu Yu’s art and Juan Romera’s colors are super clean and extremely tasty.  The “Rotters” are even cleaned up and seem less grotesque keeping the animals the stars of the show and the rating PG-13.

So when it comes down to it, the way I see it, you have two choices:
#1: Buy and enjoy this deserving title
#2 Duck.
Posted by The Hammond Comics Blog at 11:43 PM