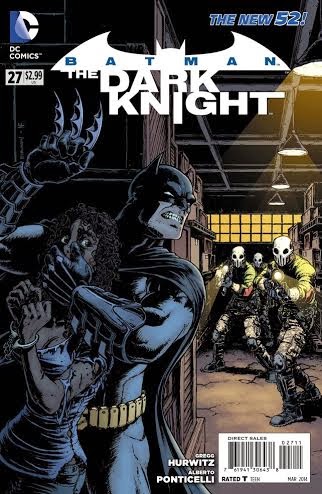 Batman has been an institution in the comic book world for almost a century since its introduction in Detective Comics #27 published in May 1939.  DC used their Batman and Superman real estate to cement a long and prosperous future.  Both are a couple of the few comic book heroes, whom are well known to people outside the comic community.  So why is DC bending Batman over a table and raping the crap out of him?

As a long time fan of the dark knight, I was hoping for some awesome things to happen after the “New 52” took hold, but alas, so many titles got thrown into the grinder. Not wanting to be bogged down with several titles to keep up with I chose Batman the Dark Knight series to follow as it restarted.  At the time David Finch was writing and drawing the comic, and he did a fantastic job with developing the Dark Knight series as it should be, a dark monstrous tale.  He had a way of really bringing out the monster in each of Batman's villains, who really define Batman with their direct influence.  In Batman the Dark Knight #10, Gregg Hurwitz was introduced as the writer while David Finch was still creating the artwork.  The story was still doing well at that point with the introduction of the Scarecrow into the new series, but it is my belief that David was still having a major role in the writing.

Batman the Dark Knight #16 is the first issue of this line where we do not see David Finch's name appearing on the comic at all.  This point also resembles the point at which when you flush the toilet and realize all of the shit is not going to make it down the drain.  The story has gone drastically downhill fast and has ended up in a story arc labeled “Voiceless”.

These last issues have made me laugh, and I don't mean that the writing or artwork was really witty.  I laughed to stimulate some brain activity before I would need to call an ambulance for resuscitation.  Gregg Hurwitz needs to understand what he is writing.  It is obvious he has never read Batman until recently or at all.  My support for this is in issue #25, the last book of the Clayface story arc, on the next to last page.  Batman appears behind Gordon, as he has so many times before, and says, “It's me. I'm behind you in the shadows. I'm going to speak now.”  What the fuck is that shit?  There are three things wrong with that statement alone, and I am listing that shit:

·He is all ready talking, so why does he need to announce it.
·The picture shows him in the shadows.  We don't need to be told, and Gordon should be used to it.
·When in the frozen hell, would Batman EVER say anything remotely like this.

Now lets talk about the Voiceless story arc.  At first I thought this might be a creative way to tell a story by not using text and only the artwork.  Two problems arise.  First, there is no transition into this story arc.  We go from Clayface being captured to immigrant workers and child labor.  The story does not make sense and does not flow right.  Second, you are depending on a piss poor artist to tell your story.  Seriously, Alberto Ponticelli does seem to have artistic talent, but it is not presented well in these two issues, where his artwork is telling 100% of the story.

The DC editors do have a sense of humor though.  In both issues of the Voiceless story arc, Sal Cipriano is credited as the letterer.  Both issues have no text aside from a child in issue #26 going, “koff koff.”  I am not sure if the letterer does the lettering on the title page, but whether they do or not, congratulations Sal on an easy paycheck.

My vote is that DC should get a new writer and artist for this line and possibly restart it.  Get David Finch back on it.  He did great work.  As for me I think I can not waste any more time with this line of comics and will remove it from my pull list until DC switches up the creative team. I will miss not having any Batman in my folder at all each month, and as a lifelong fan, this speaks volumes.

Posted by The Hammond Comics Blog at 10:10 PM